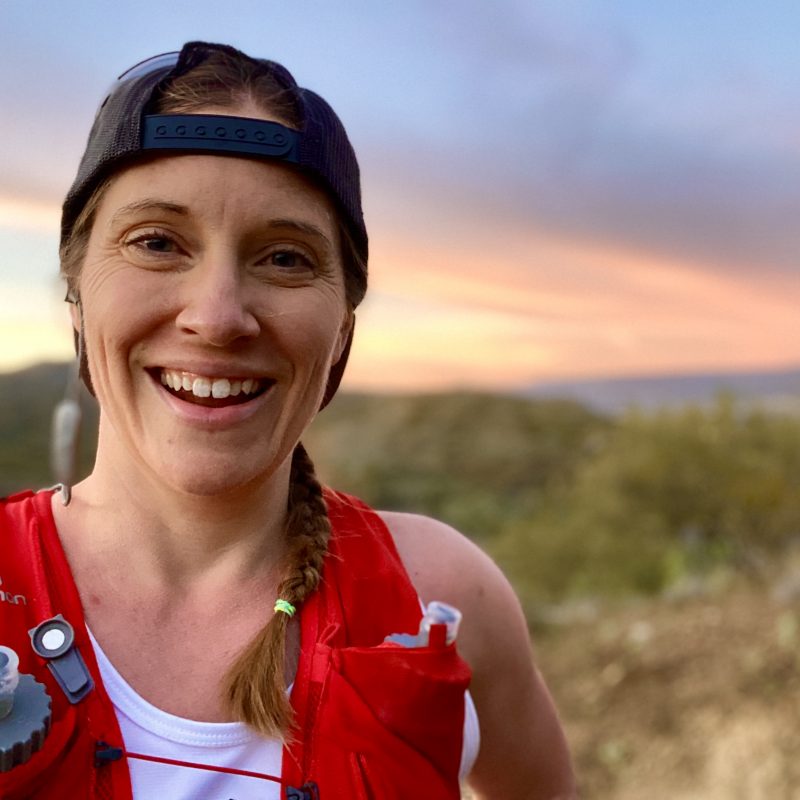 Lorri Randle joined Stazza’s Stable a year ago. Her first instructions from The Stablemaster were that she was to stop running altogether. The Stablemaster knew, immediately, that she had a stress fracture. He sent her to one of the top orthopaedic surgeons in Utah, Dr Matt Poulson. Doc Poulson specialises in knees but he was happy to help out a Stablemate. Doc Poulson did all the magic work and got Lorri back on her feet.

Over a few months, we rebuilt Lorri. We made the world’s first bionic Lorri. Super Lorri.

Gradually, we built up her training, worked on some basics, and carefully prepared her so that she would be ready to start racing this year.

Lorri’s first race this year was the Black Canyon 60k (trail). Out of 296 starters, Lorri finished 176th. What a great start to her ultra career. Here’s Lorri’s race report…

I didn’t get nervous until 5 mins to the start. It was already hot but felt so ready to get started. Made it with ease to first aid station 7.7 feeling great!

Fun single track dirt. Passed a congo line of runners walking switchbacks and felt super grateful for my running miles work. I had finished one flask of maurtens drink and so I had them fill that up for water to let it warm up so it didn’t hit my stomach ice cold. Debated whether to switch to gels but thought it better to not mess with what was working.I think that was a mistake. I should have started salt right then as the sun was getting hot, no shade and temps were rising.

As I rolled into mile 13.1 Aid station the heat had already started to take its toll on me. Filled the other flask with water and switched to gels and water and would pop a chewable salt tab between gels. It wasn’t enough and I felt my muscles starting to cramp and had a hard time peeing. I refused to let my mistake get the best of me. On this stretch I started looking around and soaked in the landscape. It really is a beautiful course. This challenge was new but I kept my ‘cool’ and started to troubleshoot what I needed to do. Quick text to Cam and coach at the halfway AS 19.2 and then another friend Ben who does super 500mile long distance and uses maurtens was there at the AS and both he and coach said to take in more salt and water. Ben said coming from 20degree running to 70 degree can take its toll. And that maurtens rock but don’t have enough salt for that kind of temp jump for him.

I changed socks and shoes for a fresh ‘restart.’ I took too much time here at this AS but it was needed to regroup. So I slowed down and just did water and salt till mile 24 AS. I felt so much better. Had a hard time peeing for the rest of the race but still smiling and proud for rallying. I wanted to just cruise into the finish with a steady pace, but mile 27-37 we were cautioned was when the technical portion and most elevation was in the course…

They weren’t kidding. 1/3 was dirt paths, 1/3 was dirt paths with rocks sticking up everywhere and 1/3 was riverbed rock path. Mile 28ish making my way down a 600ft decent and my toe hit a rock. I stopped myself from falling, felt all my muscles tighten up and was worried about cramping but they all relaxed and I felt relieved. But the next step my heart dropped. Super sharp pain in my toe. Damn!! It was only if my foot hit the downhill wrong. I could tell my gait changed and my inner quad muscles started to fatigue trying to control my downhill running from then on out.

Every downhill was painful in my quad and sharp pain in my toe. Crossed the river soon after that and my feet loved the cool water. There was a steep hill up to the last aid station and I welcomed the uphill but could tell my body was fatiguing. Coming out of that aid station I saw 6.2 and really really wanted to just get it done.

Mile 34 another river crossing up to my knees and I loved the cool water on my legs. However it was hard moving with my toe throbbing and my feet feeling like they weighed extra and then had a ton of sediment in my shoes. I wrote Cam after that. It was the one moment in the race I felt discouraged. I had a secret time goal slip away and I was feeling every downhill and the fatigue uphill hit too. I wished I had some caffeine to fill any pain but I didn’t.

He wrote back: If you’re hurt, evaluate, assess and live to run another day. If you’re just hurting then dig deep to remember why you’re out there and finish this thing.

One more uphill switchback at mile 35 with the sunset and I took time to take pictures and soak in what I was accomplishing.

Then my goal was to beat the last bit of light to the finish so I didn’t have to pull out my light. I cruised as fast as I could saying a very naughty word my toe hahahaI kept running into pacers coming the opposite direction to meet their 100k runners and some of them didn’t step aside. That was frustrating. But I just couldn’t stop. I wanted to be done!! At least come in under 10hrs. Those rolling hills those last 2 miles were perfect! Wish we had more of those!!

Cam was watching the kids and I’m not sure who had the harder job. Lol
Overall: I’m very please that only a year ago I was sitting on the sidelines watching my races go by and this weekend I ran my first 60k. I made some rookie mistakes but I’m glad I made them now so I can learn and grow and just continue to get stronger from here. The ‘running miles’ of work I put in paid off in the end since even at the finish having dealt with obstacles thrown in I still was passing people in the final 2 miles.I learned a ton, won the mental game, had a blast and smiled the whole time!