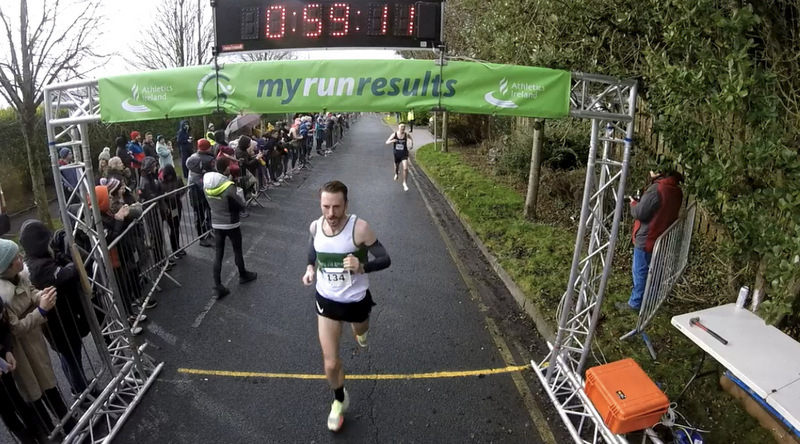 The little man with the big heart.

It was Stablemates a-plenty at the highly competitive John Treacy Dungarvan 10 Mile in Waterford, and Cork Hobby Jogging Fraternity brother Tadhg “the Curator” Crowley had a race to remember, for more reasons than one.

First off, Crowley achieved his target of smashing the hour barrier in 59:11—whacking an immense 2’19” off his PB in the process—and he was comfortably inside the top 100, finishing in 72nd spot.

The Stable News’ Dungarvan correspondent, Ally “the Chin” Smith, took a break from shipping curling stones to the Beijing Winter Olympics (helping Team GB trounce former champions Sweden) to have a blether with Crowley about the other reasons why it was a memorable race:

“The goal for Dungarvan was clear: break the one-hour mark. I felt in great shape; training had gone perfectly. The couple of days in the lead-up to the race, however, did not go so smoothly. With a house full of sick children and plenty of work stresses, sleep was hard to come by. Then, on Saturday night, I was woken by a nasally voice and found a slender figure in a grey cardigan hovering at the end of my bed. It was the Ghost of John Treacy Present. Full of the joys of endurance running, the Ghost of John Treacy Present was visiting me to impart invaluable knowledge about the road race named in his honour.

It was about 3am, and the Ghost of John Treacy Present had been blabbering on about everything but the race for half the night. From the challenges of wearing glasses and face masks together, to the pros and cons of crusty and doughy blaas, on and on he went until he finally got to the 10-miler: “You must go out hard, make those gains in the first five miles, embrace the pain, swallow the wind, and drink the rain blowing in off the sea. A winner is a warrior; they push it to the very limit, then they revel in the success—or lie face first in the ditch. That is road racing, baby.” And with that, he was gone …

My alarm went off at 6am, and I got up with a splitting headache. I took a few painkillers and tried to make sense of what had happened. Pretty much everything the Ghost of John Treacy Present had said contradicted Coach Stazza (apart from the glasses/mask thing). What was I to do? Listen to an illusion of a ghost of one of Ireland’s greatest (living) marathon Olympians, or to Coach Stazza?

Wind was forecast and duly arrived—a strong westerly that would make miles three-five very challenging. I parked up, popped some more painkillers, and did the warm-up. It was fantastic to see such a large crowd at a race again.

At 11am the gun went, and what followed was the most enjoyable and comfortable race I’ve ever run. I took it nice and easy for the first mile, keeping the 60 minutes pacers in my eyeline. The two pacers split, and I dropped in behind the second group, weaving in and out behind runners to maximise protection from the elements during those challenging miles.

In what felt like the blink of an eye we had reached mile five, at which point we’d caught the other 60 minutes group and turned together for the second half with the wind at our backs. There is an incredible comfort in running in a group like that, where you know even if you get tired you’ll be carried along. It felt just like a Sunday morning run down the Marina with the hobby joggers. We were about 20-30 seconds inside the hour mark as we cruised through miles seven and eight. The lead pacer sounded like he’d been primed by Coach Stazza, as he shouted out words like relax, easy, and patience.

We reached number nine, and I made my move. Accelerating away from the group, I was joined by fellow Stablemate Colm Daly. We cruised down the hard shoulder of the main road with the wind at our backs and the clippity clop of carbon plates ringing in our ears—living the good life!”

“Brilliant running as always, mate; and massive congratulations on the big PB and blasting through the hour. But the other stuff? That’s some story, man; want me to give my mate Derek Acorah a ring and see if his spirit guide can exorcise big JT before next year?”

“Ha-ha, no thanks. I’ll keep my visits; us runners are a superstitious bunch—everything needs to be perfect for a PB, ha-ha.”

“Brilliant. What’s next for you on the calendar?”

“Next up for me are two more 10-milers: in Mallow (late March) and Cobh (early April), and I’ll be looking to shave a few seconds off my new PB.”

“Well I know you’ve got it in you, buddy, regardless of whether any visitors come the night before, ha-ha.”

The Stable News dialled Coach Stazza’s state-of-the-art jet ski while The Maestro splashed about Lake Victoria, getting his adrenaline fix: “This thing’s like a rocket! I’ll need to upgrade the one I’ve got back home; this one even has a hamper basket under the seat for all my lovely cheese and wine. Pure bliss.

What’s this I’m hearing about the legend John Treacy contradicting all my advice? I’ll need to get Ally’s pal Derek over and have a word with him myself. Anyway, a blinding run from Tadhg: perfectly paced, in control, and kicking on when he wanted. I  am overjoyed that you had that experience, my boy. Let’s keep it going!”