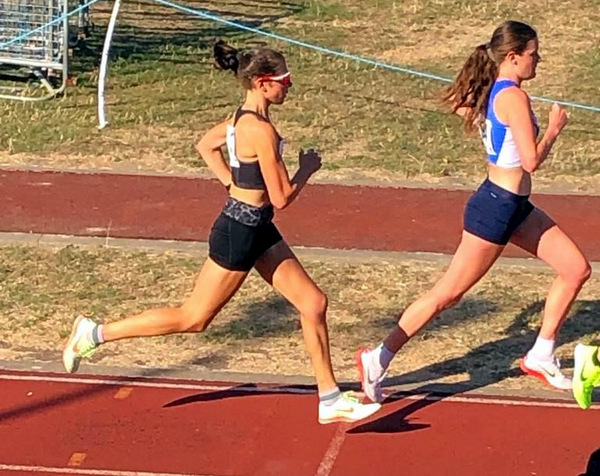 Stablemate Kate “Dynamo” Drew annihilated yet another of her track PBs, clocking 16:15 (and claiming third place), at the Hercules 5000m Festival Night in Wimbledon Park, London. The dashing physio smashed a whopping 27” from her previous best, set at Watford’s BMC Grand Prix back in June.

Fresh off a four-week stint in Spain for warm-weather training, the London heat was no trouble for the Emerging Talent star.

This is her umpteenth personal record in recent months; all told, Kate’s taken 1’13” from the 17:28 PB she held at the start of the year. Incredible!

Speaking exclusively to The Stable News after the event, she exclaimed: “Felt confident going into the race. I said I was going to run 16:15—no faster, no slower, and that’s exactly what I did. Consistent, 78-second laps throughout.”

Ally “the Chin” Smith was at his friend’s wedding (three courses and two bottles of red deep) when the news broke. He immediately jumped out and sent us this slurred voice note: “Fanta-shh-tico! Kate’s defff-initely on a mis-shh-ion to get on the global stage! Amazing, hen; well done.”

Coach Stazza was dancing on the ceiling when he heard the results: “Yes, yes, yes! That’s what I’m talking about! Exactly the time we both predicted, and she nailed it to a T … She’s got much, much more to come. Well done, Kate, and stay tuned, folks.”

The dynamic one is now headed towards the Antrim Coast Half-Marathon on August 28. With an always-ready élite field to compete against and selection for Team England, Drew will be giving it all she’s got!