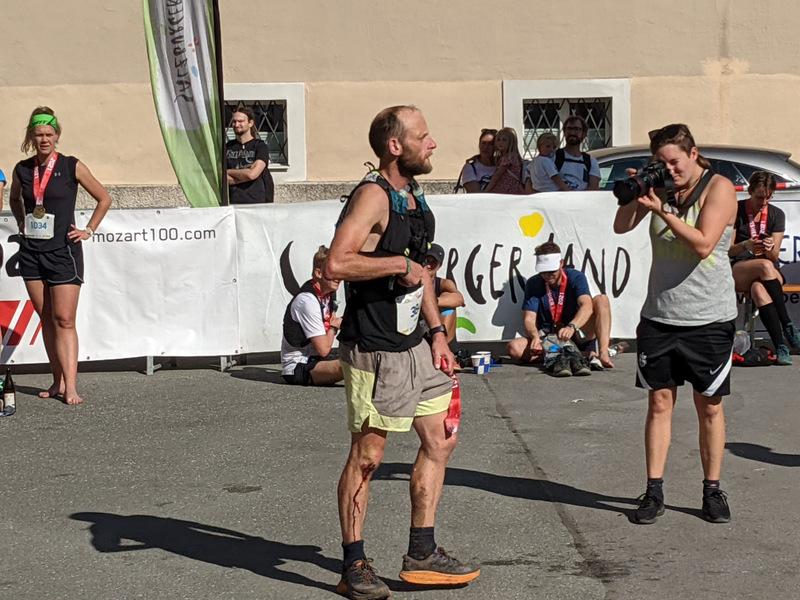 Stablemate Adam Groucott gave the ultrarunning world a shock and awe, one-two sucker punch with a sensational second-place finish in the Ultra-Trail World Tour Mozart 100 in Salzburg, Austria. “The Kiwi” left the beautiful—some would say rather Alpine, in parts—landscapes of New Zealand to settle in the Banner County (Clare) with barely a Toblerone to its name for mountainous terrain. Yet, he managed to best all but one in a technical, 100K ultra with a staggering 5000m of elevation gain. His time? A remarkable 08:46:32.

Ready to embark on an adventure that would shame his heroes Frodo Baggins and Samwise Gamgee, Groucott told The Stable News: “We started in a misty dawn that burned off into a beautifully warm and clear 24℃. My warm-weather training during “the great Irish heatwave of 2021” paid off, as I didn’t find it too bad. A cold shower from a farmer’s power hose also helped.”

Despite securing a silver triumph, the bashful Groucott was quick to point out that he had “never run more slowly in [his] life.” But a PB is a PB, boyo—no matter how long it took to get it!

Groucott continued with tales of his epic adventure (even apologising for waffling on a bit), but we assured him that an ultra race report should be (almost) as long as the endeavour itself: 🤣🤣

“Checking in the day before my race, I felt a little overwhelmed. I stated my name, got my starting bib, and burst into tears, as I couldn’t quite believe that I was there in Salzburg after the past 18 months we’ve all endured.

I took up running just over a year ago and somehow had alighted on this event to be my first-ever race, when a nice 5K would have been bloody dandy. I blame crewing my friend Rick on his first ultra for giving me the bug; I wanted that dead-eyed stare of the ultrarunner.

The next morning, on the start line, it was a countdown to 10 and a slow shuffle through the field in the first 3K of runnable flat. It got vertical fast, so I settled in to hike the 1000m to the top of the Zwölferhorn. The pack had thinned out to three, and I thought maybe I am in the top 20 as we reached the peak and the first aid station, where I let out a very loud ‘hell, yeah’ at the view. I even started taking pictures as the other two lads bolted past me, skipping the aid station, which I got stuck into because it was laden with Red Bull—and that does, allegedly, give you wings.

I fluttered after them; the lad in front asked for my international trail rating, and I simply said, ‘It’s my first race, bro.’ We all lost each other for a bit where I took a wonderfully hard tumble going down the sort of ruggedly technical downhill I can’t find to train on in Ireland. Gifted with a nasty gash on my leg, which dried into a certain shade of brown, I decided to wear that brown blood as a badge of honour, even when later an Austrian would ask me if it was, ‘How do you say in English … diarrhoea?’

The three of us regrouped at about 25K, and I asked the lad in front, ’What position do you think we are in?’ and he said, ‘I am first and you are second.’ Oh, sh*t! I guess I am in a race. I did a quick mental and systems checklist, felt fine, and said to myself, You’ve got this; this second place is yours. Just don’t quit on me. So beast mode was activated, and various trite, inspirational movie quotes were cycled through before ‘Come on, Mr Frodo. I can’t carry it for you, but I can carry you,’ became my mantra, and I just kept it real simple.

I ran the flats and downhills, hiked the uphills (which got hard when cramp kicked in at 40K), stuffed my face at aid stations, put in fluids other than Red Bull, and when I felt like sh*t, I embraced it because I knew it wouldn’t last, as this was the only place in the entire world I wanted to be. So why stop, why hurt, you ain’t quitting: give them a taste of Kiwi.

The lad in front disappeared out of sight, but so too did the lad in third place, who slipped farther and farther behind, and then somehow, there was only 2K to go, and one final downhill, and bam! I go down hard on my shoulder before rolling onto my back; then both of my calves lock, in unison, with cramp. There is not a soul about, so I let go of all dignity and just scream in agony for a good 20 seconds before the brain kicks in and says, Come on, Mr Frodo. I can’t carry it, but I can carry you. And up I get, shaking off the cramp as I make it down to the flat of Salzburg, where a lad with a camera is waiting to run the last K with me.

I shout at him, ‘Give ‘em a taste of Kiwi!’ and he thinks, quite rightfully, Who the hell is this lunatic with sh*t running down his leg? But he sticks with me as we glide through the streets of Salzburg, finally running. My gait is back, and ticking over at 4:20 per km, which, after 70-odd K, is bonkers. People are cheering, and police are stopping traffic—and I’m going to make it.

Close your ears, John, but I end every training run with a 30-second sprint as I imagine a finish line. And well, there it was. There was my first-ever finish line. So I pinned my ears back and sprinted down that chute to finish in second place. For a first-ever race to end with a podium finish and a silver medal that’s now “my precious”; well, as we like to say in New Zealand, ‘That is sweet as, bro.’”

The Stable News’ junior reporter, Ally “Yodel-ay-hee-hoo!” Smith, was miffed that he didn’t get to meet Adam in Austria: “Cutbacks are a bunch of crapola! I’ve been practising singing ‘The hills are alive with the sound of music.’ But no matter! Adam the Kiwi, kicking up a storm in Salzburg. Superb, pal—second place! That is nuts. Now get plenty of beers down you for recovery and rehydration.”

Coach Stazza had also been keeping tabs on the Kiwi, between multiple “tasting menu” courses in Abiss restaurant: “From training in Ennis to taking on the Austrian landscape is an amazing achievement. Please don’t retire, Adam! You can take on the ultra greats with only a few more years of training. Well done, son, well done.”

With retirement fleeting in and out of his head, what does Groucott have in mind: “Probably the Wicklow Way Race in about a month—just a lazy, 130K stroll. ‘What a stupid bloody sport,’ my mother said. And well, I cannot disagree.”