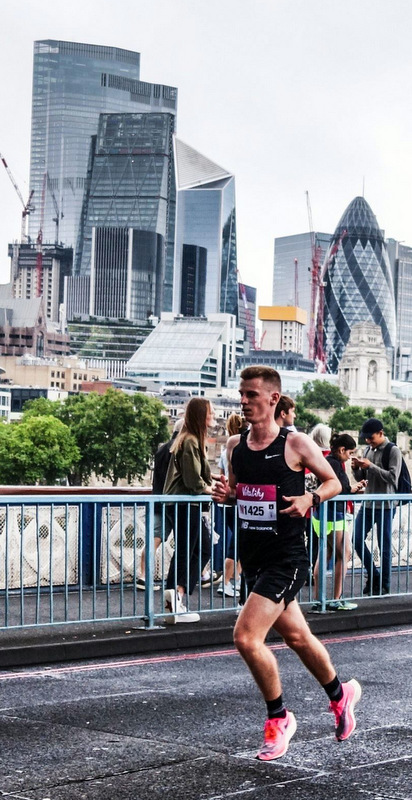 Nine-month-old Stablemate Ryan Carley carved out a 40-second PB, running 1:22:04 at the Vitality Big Half in the UK’s capital city, London. Construction site agent Carley was buzzing four weeks earlier at the Bedford Autodrome Half with a stonking time of 1:22:42 in 100% humidity—and he’s just smashed that to pieces. Maybe he should look for a demolition job instead?

The Stable News’ secretary, Ally “Can I take a message?” Smith, was tasked to go undercover and get the Agent to talk; although we didn’t suggest it, he went all Bond villain on the poor boy:

Agent Carley: I’ll tell you everything! Just leave my eyebrows and fingernails alone; I’ve just had a manicure.

Dr Smith: Good, good, now start from the beginning. Are you sure this was a PB?

Agent Carley: Yes … y … y … yes, a PB by 40 seconds from the Bedford Autodrome Half I did four weeks prior. However, since joining The Stable nine months ago, my half PB has dropped by five minutes. 😊

Agent Carley: My first experience running through the closed streets of London, and I loved every second! I started fairly controlled and gradually progressed throughout the race. There’s something about a crowd that just helps you find that extra gear towards the end. Was really happy with how the pace felt. Considering this was my 5K pace less than a year ago, it gives me a lot of positivity and confidence going into the final few weeks of marathon prep.

For those fanatical with Strava and running YouTubers, it was fairly satisfying seeing Ben Parkes just ahead of me towards the end, and naturally I had to sprint finish to overtake him just before the line. My claim to fame will now be featured on one of his vlogs.

Dr Smith: I knew it! You better give up the secret location of Coach Stazza! Only he could make someone beat a YouTuber on the line. Tell me where my sworn enemy is hiding?

Agent Carley: NEVER! Now I’m breaking outta here, as I’m on a mission towards the London Marathon on October 3rd.

Dr Smith: Blast you, Agent Carley! I’ll have my revenge then, and Coach Stazza will kneel before me! Ha ha ha haaaaaa!

Coach Stazza, hiding out in his secret lair, a cross between the Batcave and Superman’s Fortress of Solitude, added: “Ooft, that was a close one; but I knew Agent Carley wouldn’t give me up. What a performance he had in the Big Half, and he’s sure to do the same in the “Big Full.” 😉 Good man, Carley, good man.