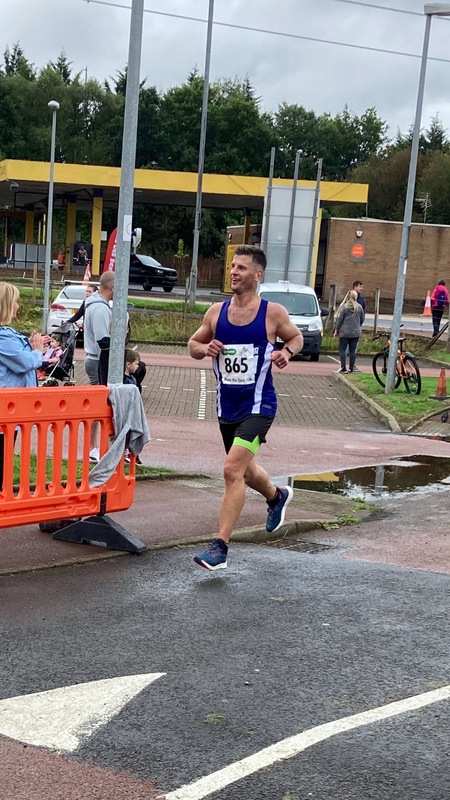 The Stable’s favourite multi-hyphenate, Ally “the Chin” Smith, took a break from coaching, writing, and gym managing this past weekend to lace-up his shoes for the Roon the Toon 10K in Kilmarnock, Scotland. The Chin offered to pen a Ryszard Kapuściński-style, first-person account of his Tour de Killie. But in the interests of journalistic objectivity, we sent Stable News Editor-in-Chief, General Puffball—in COVID-protective clothing—to get us the facts.

While he negotiated the Belfast to Cairnryan ferry with ease, the 60-mile jog from the port to Kilmarnock took a toll on the out of shape Puffball, who only arrived after the race had finished. Amid the din of the Ayrshire Athletics Arena, he spotted Smith crouched in a quiet corner, munching on an Irn-Bru-dipped, deep-fried Mars bar, watching Limmy clips on his phone.

AS: It was Marti Pellow, ha-ha!

AS: General! You made it here in the end … looks like you’re sweating up a storm inside that hazmat.

GP: Yeah, the conditions are challenging.

AS: I blew up big time. I lined up in the 40-50 minute pen, and when the gun went off, we just hammered down the road. Within 3K, I knew I was in trouble, and my pace just slowed and slowed. Constant thoughts of jacking it in, walking for a bit, and just keep going were tussling for attention in my mind. Plenty of runners passed me, and that was disheartening. But I just had to put one foot in front of the other.

With the finish coming into the athletics arena for a sprint around the track, I kicked with everything I had and collapsed on the tartan at the end. They’ve given me a chip time of 51:14, which is well off my “real race” PB of 46:27 and my Stazza TT PB of 45:00 from last May. Maybe this time I’ll learn the skills of pacing and listening to Coach Stazza’s advice, as I never want to feel like that again.

GP: In fairness, you had a compromised build-up.

AS: Yeah, it’s bad when the taper week contains more miles than the three weeks before! I was supposed to start the Stazza Super Base again, but I hurt my foot, which left me mostly doing easy runs for the last month. So I wasn’t expecting anything major out of this 10K.

GP: Still glad you showed up, though?

AS: 100%. Kilmarnock Harriers couldn’t have done a better job with the organisation. The race had a great atmosphere; it was great to see so many runners warming up and chatting to each other. The church choir was singing, there were cheerleaders, and a drumming band kept the motivation coursing through my body. I nearly started walking at around 7-8K, and that was where the drummers spurred me on. The people on the course were really encouraging and had a great community feel. That’s what keeps you going when times are tough. And I still finished in the top half overall, so it wasn’t all bad, he-he. I’ll definitely come back to this race again.

Returning to Tralee on Monday morning, Puffball stopped by stately Stazza Manor to check in on The Stablemaster, who he caught draining the last of a tulip glass of Cristal.

GP: Isn’t it a little early?

CS: It’s never too early. Besides, drinking to a schedule is the first sign you have a problem, ha-ha!

Seriously, though, it’s for research purposes. Remember how van Aaken told his athletes to take beer for recovery? Because of the essential vitamins?

CS: Well, I’ve discovered that the ionic parabutors in Cristal are even better for distance runners. Mix 20ml of the stuff in with your Maurten, and you’re golden. See, this is the sort of attention to detail that sets me apart from spoofers like Jon Green.

GP: Absolutely. Care to share your reflections on Ally’s race?

CS: A lot of people online are giving it the big chat about his pacing. But here’s the rub: a little birdie told me that Ally sprinted off the course to fetch a medic for a girl who’d fainted. So it’s little wonder his own performance tailed off in the latter stages. He’s my hero.

Anyway, let’s look at the big picture. Most of the critics can’t do maths. But I can. And I know that if Ally simply extends his 10K pace out to 48 hours, Kouros’ legendary record will be put to the sword quicker than you can say “Acropolis Now.” That’s got to be the target for next year!

We coaxed this reaction from a bashful Ally: “Ach, I’m no hero. Any decent person would have done the same. I’m not sure about this ultra business, either. I was thinking of tackling the Stirling Marathon or Great Scottish Run, but they’ve both been cancelled. I’ll probably find another 10K to restore some pride.”

You’re already the pride of The Stable, Ally.