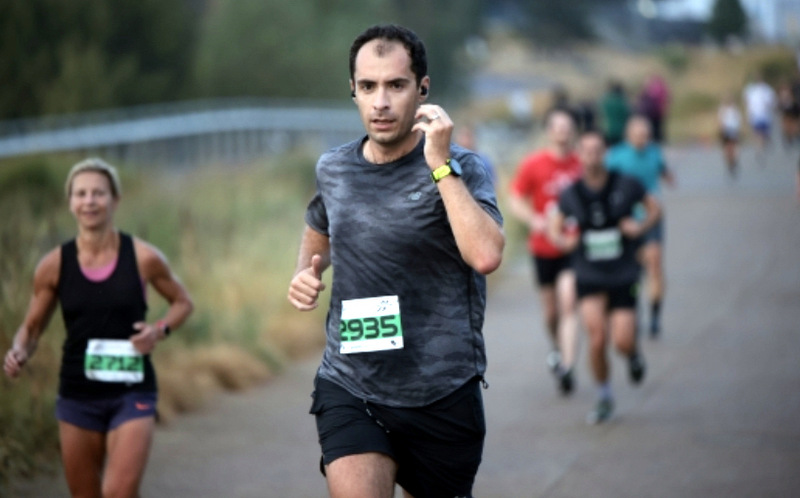 But even with that stonker of a PR, the Big Man wasn’t best pleased; he was seen ripping his bib number off and screaming as he stomped through the finish area, kicking barriers while shouting “TWELVE BLOODY SECONDS!” at bemused spectators.

The Stable News popped Ally in a taxi to try and calm the Big Man down:

Ally: Oof, here we go. You alright, James? Fancy talking about the race?

James: Hmmm, give me a minute to calm down! I’m absolutely livid!

Ally: Sure thing, buddy; let’s nip into that boozer, and you can get a pint down you.

Get that down you, bud. Whoa, take your time.

James: Ahh, I needed that. Right, here’s how it went.

The race was a Chase The Sun 10K around the Olympic Park in London on what felt like a very humid evening, but thankfully much cooler than it had been over the last few days.

My PB, which I got four or five years ago (51:32), was going to get destroyed. I’ve had two good years with The Stable; while training has had its ups and downs, I knew I was easily in PB shape.

James: As Stazza and you know, I’m still raging. 😠 Just 12 seconds off a sub-45! Yes, still a massive PB, but 12 seconds is nothing—only three seconds per lap! That was all I needed extra. Also: being beaten by someone dressed as Bananaman was not a good look and made me hungry.

Ally: Oh, I hope that wasn’t fellow Stablemate Bruce “Bananaman” Thomas. Listen, James; being this annoyed after a gigantic PB is testament to your passion and drive for that time. You’ll get it soon, bud, I’m telling you.

James: Cheers, Ally. I was just checking my phone for my next 10K to get under that bleedin’ time!

Ally: Ha-ha, no time like the present, mate. When’s your next main race?

James: My next “A” race is a half-marathon in October which has been in the books for a while.

Ally: Nice one. I’ll leave you to your celebratory/consolatory bevvies and get back up the road.

James: Thanks, Ally. See you next time.

The Stablemaster was also celebrating! After losing two pounds in his weight-loss challenge, he was gorging on bowls of pasta with olive oil, dumping spoonfuls of parmesan after every bite:

“Mmm, mmm, mmm, the taste of victory! I worked hard for this and will be back in the game straight after my refeed. I want more. Just like our man JDS … A tremendous run and humongous PB—and he’s still unsatisfied. He’d race a 10K tomorrow if he could! Ha-ha, that’s what I’m talking about! Never settling for less than you wanted. Fear not, Big Man; the elusive sub-45 will crumble beneath your feet very soon. Good man!”