AN ENGLISHMAN IN PARIS 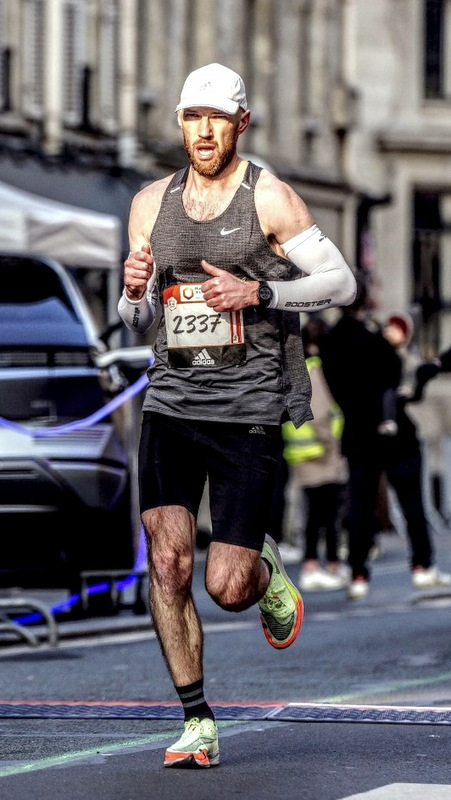 Stablemate Daniel Smith hammered a whopping 6’26” off his half-Mary PR in the city of love and romance—Paris. Pounding down the Champs-Élysées, the Man U maddie clocked an amorous 1:20:06, narrowly missing a sub-80 but crossing the line 566th/40,000+ overall and 93rd in the open category.

The ex-air force lad used to train in the bitter winters of Oxford and throw extra ice down his pants to make himself even tougher (#HardAsNails), but he seems to have gone all fragile and gooey in Paris, wearing arm warmers in the toasty, 1°C climate. He added: “I wore sleeves for the first time. I lost ‘man points’ for being a bit soft, but they definitely helped.” Whatever you say, Dan.

The Stable News heard Ally “the Chin” Smith was whisking his wife away to gay Paree for a weekend break. We hijacked his child-free sojourn and sent him down to have a blether with Dan:

Ally: How’s it going, Dan? I’m a bit rough, to be honest, so don’t be offended if I need to jump behind the bushes.

Dan: Ha-ha, not a problem. I’ll be having a few shortly; a wee hair-of-the-dog might sort you out.

Ally: Aye, maybe. Just give me the facts first.

Dan: Well, it was my first official half-marathon, but I knocked 6’26’’ seconds off my previous best.

Ally: Ooft, serious improvement there, mate. How did you find it?

Dan: Didn’t sleep a wink the night before; we should have done better research on the hotel. (It was a bit too close to a booming bar playing dodgy trance music until 3am.)

Ally: Ha-ha. I think me and the missus were in there having a great time—not ideal the night before a big race, though.

Dan: You’re right, it’s not. I got a stitch after around four miles and then felt pretty sick. Looks like I got nutrition slightly wrong the night before (blaming the rich French food).

Ally: Yeah, they sure know their gastronomy here.

Slightly frustrated in hindsight not to go under 1:20, but given the issues mid-race and no sleep the night before, I can’t complain.

Ally: A fantastic first official half-Mary, my man. Many folk would kill for a time like that on their first go. Very well done. What’s next?

Dan: Possibly the Great Manchester Run Half at the end of May, then build towards the Yorkshire Marathon in October.

Ally: Nice one, mate. At least you can get a good night’s sleep before that one, and you’ll fly under the 80’ mark, easy!

Ally: Defo. I feel better already after hearing that. I know a great little bar that plays trance music, ha-ha.

The News nabbed Coach Stazza before he headed out with the Maasai mob to show them some new dance moves: “The Maasai guys saw me last night cutting shapes on the dance floor and invited me over to show them. I’ll show you some too, Ally, when I get back—goodness knows what you looked like in that Parisian bar.

I hope you treated Mr Smith to a few congratulatory beverages as well. A magnificent showing; a 1:20, in his first proper race, is a great achievement. Just don’t stay up too late, Dan; you’ll be back training in a few days.”