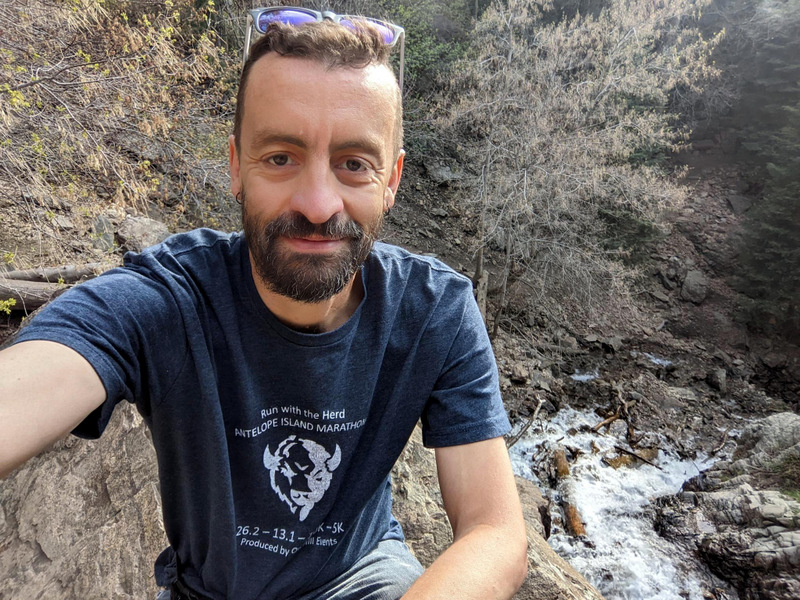 Much to my dismay, I’m drawn to black. I’m not a goth or emo; it’s just that black goes so well with *everything.*. But then I end up getting black shoes, black coats, black shirts, black snow pants, black, black, black, and I look very bland. I need to get a splash of colour in my life!

It would either be “edumacated” or “ridonkulous”—both invented by my daughter. She’s got quite the wit about her, and she comes up with some real gems. Those two have stuck, and I use them every opportunity I can.

The band AC/DC. It’s just good old-fashioned rock ‘n’ roll. I don’t understand how people don’t like them. Bon Scott was the better singer, but Brian Johnson can hold his own. Angus Young is a genius at the guitar, and his duck walk is hilarious.

I am very laid-back and easy-going. I rarely get stressed or anxious. I was born, like, two decades too late. I would probably be a fantastic hippy.

I would love to be a competent Go/baduk player. I studied chess as a kid and joined the United States Chess Federation and was ranked while in seventh grade. I would compete in regional championships and very often place in the top three overall. I ate, slept, and breathed chess.

Then, while studying variations on some opening moves, it hit me—the chess greats just have better memorisation capability than the others. It’s not strategy; it’s recitation. So I abandoned chess cold turkey. Cancelled all my chess magazine subscriptions, stopped attending the chess clubs and gave away my chess equipment. Instead, I looked to Go, where both identifying patterns and intuition mark a strong player. Go is both a science and an art, whereas chess is strictly science.

After a few preliminaries, I qualified and competed in a statewide piano competition when I was a junior in high school. I didn’t place. In fact, my judge was somewhat of a b****. But I still scored well.

The historical Buddha. Although I doubt he actually existed, his teachings have profoundly changed my life. I was born and raised Mormon, but left the faith about seven years ago and found Buddhism.

My dad. I watched him save a choking baby in a restaurant when I was a kid. A mom was screaming that something was lodged in her baby’s throat. He calmly stepped up, grabbed the baby, and performed the Heimlich appropriate for a newborn. The food promptly dislodged after one hit across the back and fell to the floor. The baby could breathe and started crying. The baby was OK. He came back to our table and finished his dinner while we were all in awe. I’ll never forget that.

Spending time with my family. Doesn’t matter if it’s watching TV, going on a hike, doing chores, or just hanging out. I’m happiest when I’m with them. Quality time is my love language.

Toronto, Canada. It’s where I served my Mormon mission and met my wife. Even though there is religious history with Toronto, it’s still an amazing city, and I would live there in a heartbeat if given the chance.

I could see myself as an interstate truck driver. I love the open road and seeing new places. I never tire of long road trips. Unfortunately, that’s a dying job, what with autonomous vehicles.

I have a precision, 60-sided metal die numbered 1-60. I’m a math and cryptography nerd, so this die lands squarely in both hobbies. I recently backed a Kickstarter project by the same inventor who made a precision, 120-sided metal die. It should get shipped in April. That will become the new precious.

Honestly, I woke up September 1, 2020 and thought, I want to run the St George Marathon. Not even joking. I hadn’t put my feet on the floor before I was thinking about what I would need to do to train. My first run was the next day. St George was cancelled for 2020 due to COVID, so I figured I would run it in 2021. But literally: I just got out of bed, and it sounded like something fun to try.

I don’t run to relieve stress, escape reality, lose weight, or get fit. I run to P.R. Running to me means competing. I want to BQ, then run a sub-three-hour marathon, then a sub-2:45, and if possible, a sub-2:30. Lofty goals, I know, especially for my age. But I don’t see why I can’t at least try. That’s why I hired Stazza. 😉

Still getting settled in, but right now, I love seeing the different goals and workouts for everyone in The Stable. It’s really quite interesting to see the diversity in the group. I also really appreciate the immediate feedback from Coach over WhatsApp. I just hope I’m not annoying him too badly.