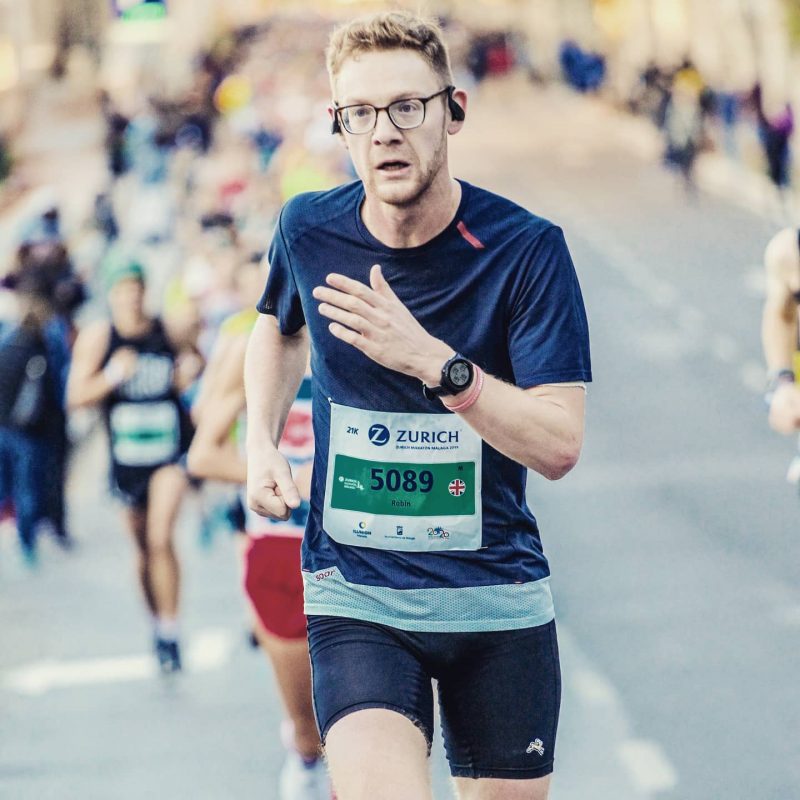 Most of my running kit is black! It also doesn’t show stains that badly, which is good for life with my 10-month-old …

I’ve been listening to a lot of Max Richter recently—while working. He did the soundtrack to The Leftovers too, which is the best/most depressing TV show ever made.

I know I’m “supposed” to say the birth of my daughter. But actually, it’s when I scored 50 runs for my cricket team. (Our cricket team plays in the Last Man Stands global league. We’re one of the worst teams in the world. Our win ratio is 5%, off 120 games, over eight years. Just to put any sort of achievement in context.)

Cyndi, my partner. She’s the funniest person I’ve ever met, which sounds like a flippant thing to say, but (a) she really is genuinely HILARIOUS, and (b) humour is an underrated character trait when parenting.

She’s also an incredibly tough ultra runner. A couple of years ago, I helped crew her on the West Highland Way race—96 miles through the Scottish Highlands. She’d done virtually no specific training (injuries), got the most disgusting blisters, had stomach issues for the first marathon (!), and still managed to truck along at a healthy 7:30 minutes-per-mile-pace down the fire road into Fort William at 2 a.m., after 26 hours of running. Running along the Nevis range in the dark—after 80-odd miles—takes a special kind of toughness.

I’m also a big fan of sportspeople with some limits to their natural talent—e.g. Andy Murray or Alastair Cook. With those guys, you can tell that they really have to work to get where they are. (For the likes of Federer, it just comes too naturally to make it interesting.)

Hanging out with our dog; a campfire. Right now? A 10-month-old that sleeps through the night.

I’ve loved the West Highlands when I’ve visited a few times. But the midges in summer make it a bit grim then. I loved Mammoth Lakes when I visited a few years ago—terrific running there, too.

Chocolate buttons. I frequently resolve not to buy them anymore, but they seem to appear in the basket, anyway. Not the best for a diabetic, but I figure it could be worse. (Hard drugs, for example, I’ve tended to steer clear of.)

I guess my old teddy bear? I’m not one for hoarding or keeping things beyond their use. My mum gave me a good tip of taking a photo of things you like—that way you can still look at them, but they don’t leave your house a tip.

A friend of mine (also a good runner), bet that I couldn’t run a half-marathon. I did end up running one, slowly, and started from there.

I think one of the challenging things in life is that the effort and work you put into something doesn’t always pay back. You can work really hard at your job and not get anywhere (or, hardly work at it at all, and get promoted). Running is the precise opposite. It’s a very honest sport, and you can’t hide from it.

You read lots of “trust the process” comments, which is all well and good, but that’s hard to do if you can’t see examples of others who have blazed the trail before you. Seeing that is important, and knowing you’re on a similar trajectory is motivating.