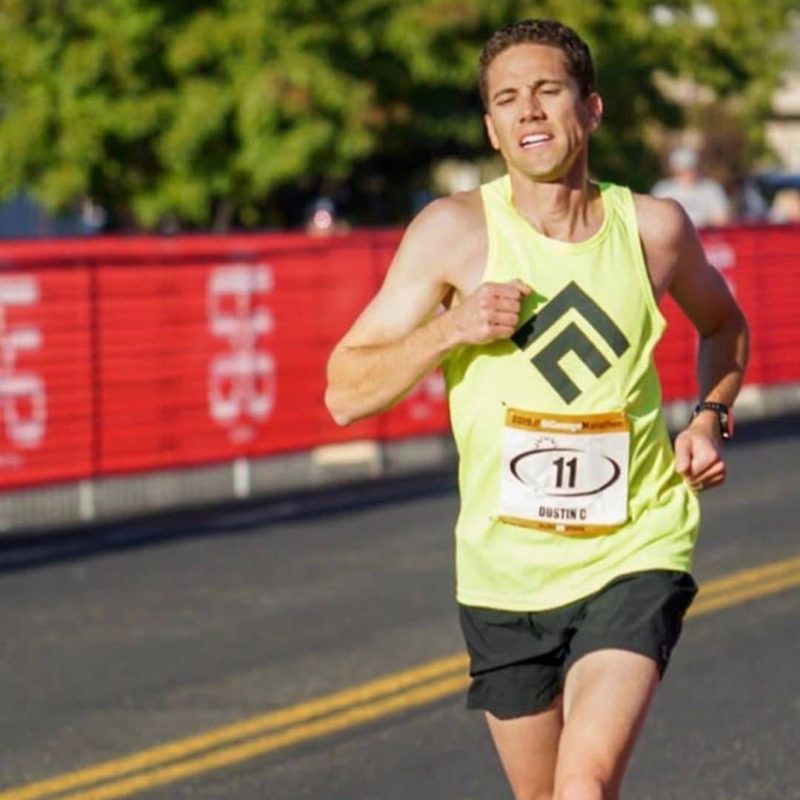 PINUP: Bionic Bybee flying towards a 2:21 (11-min PR) at the St George Marathon

Stablemate Dustin Bybee obliterated his marathon PR on Saturday at the St George Marathon. Bionic Bybee finished in 2:21, taking a gargantuan 11 minutes off his PR.

Wonderboy Bybee finished fourth in only his second marathon. Bybee went through the first half in 73 minutes and ran the second half in 68 minutes.

Speedy Bybee joined Stazza’s Stable back in January 2019. At the time, a chronic knee injury from his college days at BYU plagued him. The Stablemaster (Coach Stazza) gradually brought Bybee back to fitness.

Coach Stazza said: “Dustin’s knees kept giving out to him. We had to proceed with care. He was a bit like the bionic man, Steve Austin: we had to rebuild him.”

Bionic Bybee underwent a targeted strength and conditioning programme, along with progressive and structured training.

Reluctant Bybee had reservations. Sources close to the Bybee camp revealed that he’d studied a St George marathon calculator created by celebrated runner and BYU Professor, Iain Hunter, and he felt 2:25 was the ‘A’ goal.

But Coach Stazza explained: “Professor Iain Hunter’s calculator is a great tool for fun runners. But for more serious runners, using modern marathon training methods, the calculator is outdated. I explained a number of things about fuelling to Dustin and we agreed to go 73 minutes for the first half, open out in a manner from halfway through 20 miles, and then hammer the last six and wee bit miles.”

Winner of the masters’ category 2:23, Scott Keate said: “Thanks for the fantastic company for so much of the race. It was so cool to watch you lay it down that last 10K. It’s got to be very close to the fastest 10K on the course. AND you’re just getting started!!! Coach Stazza is right! Scary to what could be possible with a full, healthy buildup. Great race today!!!”

Barnstorming Bybee told The Stable News: “I’m going to take a rest now and then we will decide what’s next.”