BRENDON AND THE MAGIC SHORTS 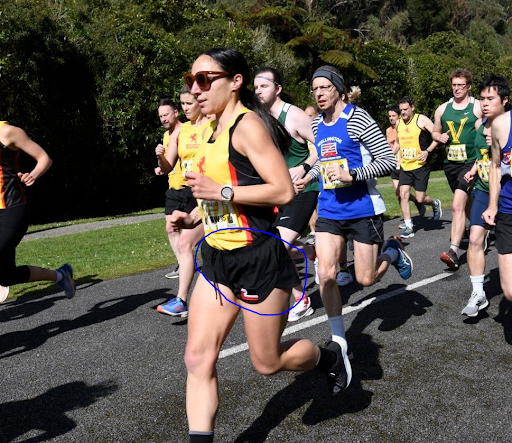 Stablemate Brendon “the Beast” Thompson awoke from his post-cross-country season slumber and swooped in with a fire-breathing 35:59—snatching M50 bronze at the Wellington Road Running Championships in Wainuiomata, New Zealand.

The Beast’s fire had been quietly quelled with beer and junk food, and he was feeling rustier than his forthcoming bronze medal. But perfect conditions allowed him to survey his prey as he smouldered on the hill.

The Stable News got wind that the legendary Beast was racing and chucked Ally “Pussycat” Smith on a Learjet to tame the creature:

The Beast: Had three weeks downtime after the cross-country season, and I wasn’t feeling in good shape. Too many beers, no running—almost pulled the pin on going two-three days out from the race. Hinano gave me her lucky running shorts (unwashed), so I popped them on and set out for the race.

The Beast: I arrived at the race and saw all the people warming up. Hopped out of my car and sat on the grass to have a vape. Put my music on, old runners, and beanie, and went for a warm-up. Was feeling OK but knew I wasn’t in race shape.

Ally: Ah, stoking the old fire … Let’s get to the chase itself.

The Beast: Headed on up to the race start line and found another quiet stop for a vape. Lined up at the back of the pack, and off we went. Up and down the hill; that was 2.5km done, and I was feeling OK. On the second loop, spotted a few M50 runners at the top turn—down the hill we go. Five km done. I had to go harder up and down this time to catch the third- and fourth-placed M50 runners.

Legs started feeling like arse. I caught the fourth M50 three-quarters of the way up the hill, turned at the top bend, and then saw the third M50 runner 60 metres in front. A super-fast young buck passed me going down, so I jumped on his tail and held on. Caught the third M50 at the 7.5km turn. Heard someone yell, “Keep on, Brendon; you will get him.” I thought, like hell.

Ally: But you got him, right?

The Beast: Yeah. Up we go for the last time. Legs were shot. Turned at the top of the hill—1.2km to go. The M50 I passed is a rabbit on the downhills. With his footsteps right behind, I just ran as fast as I could and nipped in five seconds ahead. Saw the time of 35:59 and thought, How the hell did I run a sub-36 min 10K with no training over the past three weeks?  It was those lucky shorts. Thanks, Nano. Great day out!

Ally: Unbelievable! Wish beer and lazing about would work for me. Does Nano have any other shorts I could borrow?

The Stable News hopes Ally makes it out of New Zealand before the Beast catches up with him, but there may be a vacancy posted in the job section next week. Keep your eyes peeled.

Coach Stazza was bouncing along the waves in Tralee Bay on his new high-powered Jet Ski when we called: “I can’t believe Jellybaby agreed to this?!?! I told her, ‘I can’t break any more bones by falling into water,’ and she believed me! WAYAY! I better slow down so you can hear me. Beastie boy Brendon ran a cracking race … Started at the back and then went on the hunt! I should give him some more ‘rest’ before the next race.”

Thompson will be racing again at the Agency Group 10,000m Festival—which incorporates the Wellington and New Zealand Masters Championships—full of vape and possibly beer. Now that is the nature of the Beast.