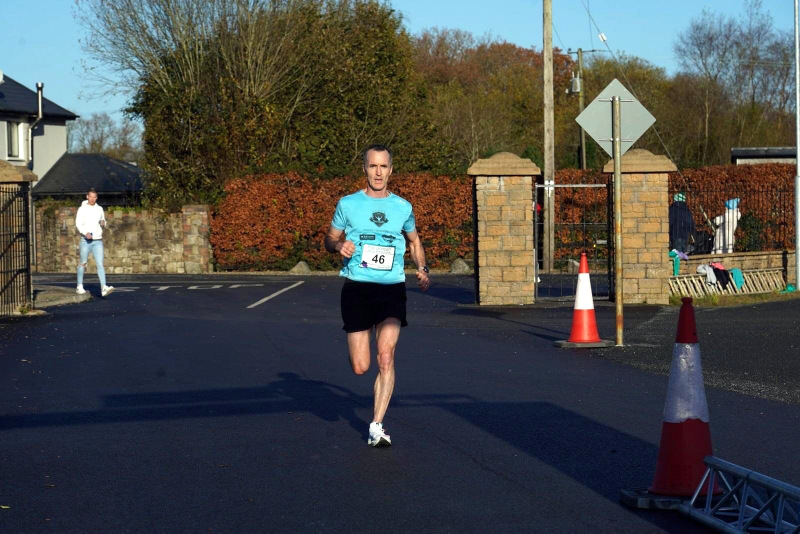 Christmas has come early for Stablemate John “the Boss” Burton, who took another 2’11” off his PB at the Border Half-Marathon in Parteen, Co Clare.

Smashing through the 80’ barrier as easily as Santa comes down your chimney, the Boss clocked a 1:19:45, finishing 13th from 406 souls and eighth place fortysomething.

And that’s not all! Since joining The Stable in February 2021, Burton has bashed a total of five minutes and two seconds from his pre-Stazzafication time.

He told the The Stable News:

“Conditions were perfect, so my head was in the right gear from the very start. I knew I had no excuses.

The course itself was not the easiest, with a lot of uphill drags and some sharp, short uphills. There were great runners in this race, and a good bunch of 10 or so flew off at the start. I didn’t want to push too hard early, so I stayed with a pack behind them for a half-mile but realized they weren’t going at the pace I wanted, so I picked it up.

I ended up in no man’s land between the two groups. I normally train alone anyway on country roads, so I was comfortable. With very little wind, I didn’t feel the need to tuck in anywhere.

In general, I felt very strong throughout the race. At mile 11, I did feel the legs starting to burn and lost some pace in them, but I pushed on.

I was surprised when I saw the clock in the distance showing 1:19 and was determined to get there—and did. In fairness, it was a great race. I felt very strong and like I’d found another gear in there somewhere, which is encouraging for my 2022 goals. Sub-1:20 was going to be a 2022 goal, but Christmas came early. 😉”

Opening up his fifth advent calendar of the day, Ally “the Chin” Smith added: “A fantastic race by a fantastic runner! John is like a maturing 40-year-old single malt—he’s only going to get better with age! Very well done.”

The Stable News contacted The Stablemaster for his take on the Boss’s run: “Another fine performance, John! Congrats on another PB and looking great for the future. Now don’t get too fat over Christmas, and get ready to be even quicker in 2022!”

Burton will maintain his training through Christmas—giving his body a well-earned rest—before he’s back on the roads in the Adare 10K on February 27.