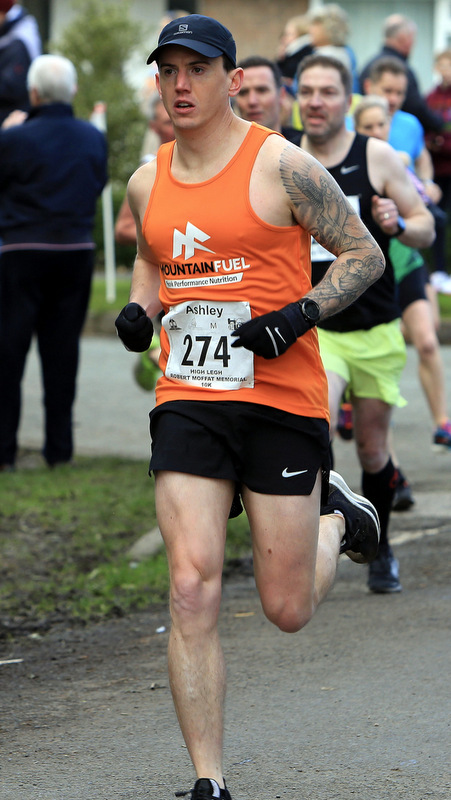 Stablemate Ashley “Choo Choo” Holbrook thundered down the tracks at the High Legh 10K in Cheshire in an earthshaking 37:29, detonating 59 seconds off his PB from the beginning of this year. No fear of the Holbrook Express running late!

Choo Choo’s engine was firing on all cylinders as he hammered home in 12th place. It also kept him toasty in the cool and slightly breezy conditions; donning a vest (and gloves), he added: “All while The Stablemaster teased on his social channels of paradisaic weather in Kenya. He’s nice like that!”

The Stable News hailed Holbrook for a few words at the finish:

I started out running by effort—which resulted in a pretty metronomic pace—so I stuck at it and leapfrogged the competition from the start, climbing from 56th to 12th over the course of the race.

My 10K time is starting to look like one of someone who may be capable of running a sub-3 marathon.

Plenty more hard work to do.”

Ally “the Chin” Smith tracked down Coach Stazza, who was chilling in the hot tub before meeting his boyz in da cluuub: “Ah, sooo relaxing. I need to do this before a night with me boyz, or the night might get messy. A good detox before and after keeps me serene. Can’t have my inner wild man released—who knows what would happen, ha-ha!

Ash Holbrook deserves a stopover at the relaxation station before I dish out his training; he is improving rapidly, and I have a few special tweaks up my sleeve to solidify his fitness. Well done, Ashley.”

Holbrook is hoping to make it a hat trick of PBs for the year so far in his upcoming race, the Wilmslow Half-Marathon.

We hope so too!