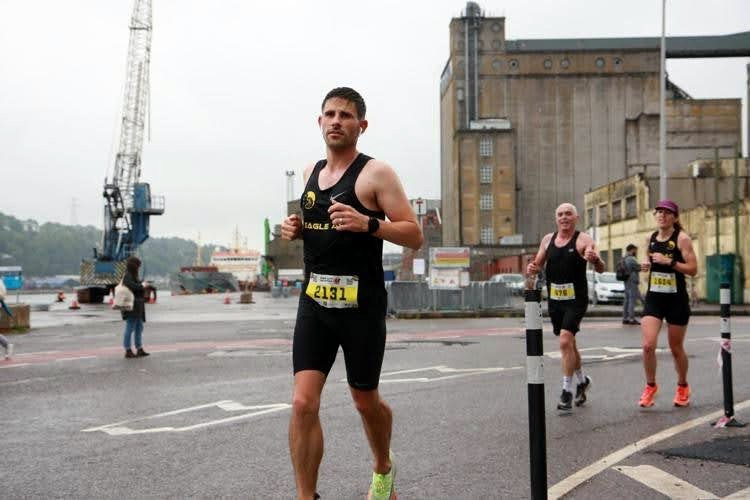 Down by the docks.

Stablemate Jason Crosbie banished the past and snaffled six minutes off his best by running a spectacular 3:14:55 at the Cork City Marathon. The last time we reported on Crosbie, he resembled one of The Young Offenders making away with a bike, and this time was no different. The big man placed well inside the top 200 overall and a very respectable 46th M35.

Since joining The Stable in 2020, Crosbie has whacked 11 minutes off his full ’thon PR, and he can see the times going only one way. He also enjoyed the much-documented floods at the event, saying, “Fantastic; very wet and mild, with a small bit of wind.”

Awaiting Crosbie’s arrival (so he could drag him to the pub after inviting himself when speaking to Lolo), the Chin spotted a tall, dark, and handsome figure approach the finish:

Ally: Yes, Jason. I knew it was you from half a mile away. How did you hold up?

Jason: I had a chat with Coach Stazza the Thursday before the race, and he worked out what the strategy should be. It’s fair to say the race went exactly as Coach expected. I was less confident at the time, thanks to my usual pre-race nerves and anxiety.

I set out a little slower than MP for the first two miles and then gradually built up to MP. I got to halfway and felt really good. Coach warned me not to speed up until mile 20 at the earliest, so I kept pace.

It felt really comfortable, and I was buoyed by the support of friends and family as we headed back into the city. Miles 19 to 21 have some decent pulls, so I made sure not to attack them; instead, I took them nice and handy to conserve energy.

By the time I got to mile 21, I knew it was all downhill or flat for the remainder. I don’t think I made a conscious effort to speed up, but as the miles ticked down, the pace got faster. I remember Coach telling me that I could make up the time I lost in the last five miles, and I thought he was crazy. But it turns out you can actually speed up at the end of a marathon.

The last mile was brilliant. I knew I was on for a decent PB, and when I turned down Patrick’s Street to the finish line, I could see that a sub-3:15 was on. I put the foot down and finished with five seconds to spare. What made it all the better was that it was the first time my two kids were at the finish line of a marathon, waiting to cheer me home.

Jason: I’m booked in for Amsterdam in October, and I’ll be working towards a sub 3:10. I wouldn’t mind squeezing in a 10K and/or half-marathon, but as always, I’ll listen to Coach’s advice here.

Ally: Nice. Amsterdam is a great city; just don’t visit any coffee shops for cakes … They’re not what you think, hahaha. Anything else you’d like to add?

Jason: Eight years ago, I ran my first full marathon. It was the 2014 Cork City Marathon. I crawled home in 4:22, and it left a few scars. Last weekend, I completed my 10th marathon over one hour faster and put the demons to bed.

Ally: Congratulations, ma man! Nothing better than overcoming the monster of the marathon.

The Stable News rang Coach Stazza, who was trying to squeeze into the wetsuit he bought last year for a bit of outdoor swimming: “No way; I’ve put on weight again! This was all the rage last year, so I thought I’d give it another go. Hopefully, there won’t be as many people out this year. Anyway, on to young Crosbie’s canter … A magnificent performance—shaving six minutes off, and putting manners on the scallywag imps from his nightmares. Top job, lad, top job.