CRUMBS IN THE BREEZE 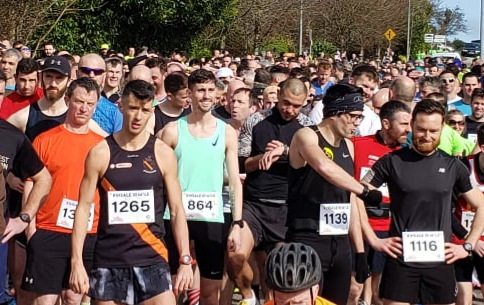 Stablemate Jamie “Dodger” McCarthy slaughtered his PB by a gargantuan 5’47’’ at the Kinsale 10 Mile, running a sensational 1:01:31. Proof that you can have your biscuit and eat it!

Dodger took in the scenic surroundings of coastal West Cork while rubbing crumbs off his Borat mankini-inspired green vest. The day’s wind blew them right into the eyes of the competition—result!

McCarthy told The Stable News: “Thought I could go under the hour, but hills and headwind from mile five made it quite rough. My last 10-miler was this very race, way back in 2020. Also: finishing in the top 20 (18th) was a nice touch.”

The News heard Coach Stazza was running low on suncream and Speedos, so we threw Ally “the Chin” Smith on the first flight out of Dublin to Kenya to save The Stablemaster’s delicate skin:

Stazza: Ally-boy! What on earth are you doing here? It’s great to see you; I’m just surprised, is all.

Ally: General Puffball sent me wi’ mare troosers and suntan lotion for your pasty skin. Want me te rub some oan yer back?

Stazza: Aww, what’s he like—such a gent. How do they say it up your way? Batter in! Hahaha … Oh! It’s cold.

Stazza: Och, it wis a belter o’ a run! Like my accent, Ally? Seriously, though; Jamie was so close to the hour mark he could smell it … It’ll come, in time.

Ally: Aye, no bad, Coach. Ah thought the same. Big Jambo was a few crumbs away, but next time he’ll bite back and crush his PB as easily as a pink wafer, ha-ha!

Stazza: Too right. Can you do the backs of my legs now, Ally?

So what’s next for McCarthy? He’s eyeing up the Cork Marathon like it were a Tunnock’s Caramel Wafer, that’s what!