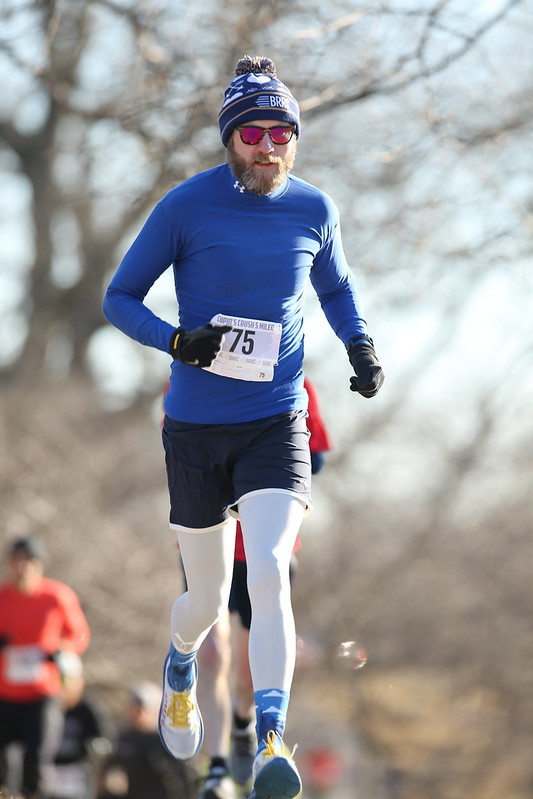 Stablemate and university fixer Westley “the Wolf” Forsythe tore round Cupid’s Crush 5-Miler in a punchy, problem-solving 33:59. The Wolf tackled the dreaded inclines of Baltimore’s Druid Hill Park, relying on his fetching new bobble hat to stave off the freezing conditions (19F, -7℃).

The Stable News’ bobble bonnet bard, Ally “the Chin” Smith, nipped on the first flight to BWI to meet the Wolf at his door:

Ally: How’s it going, Westley? Any of those delicious Maryland Cookies for me? I can eat a packet in one go!

Ally: Bummer. Never mind, I’ll bring some the next time I visit. Tell me all about this race named after some arrow-wielding cherub.

Westley: It was a great event put on by Johnny Lyons and his better half. The course is a tough old slog, with many a hill to sap the legs, and then that one final hill you always forget about—that crushes the soul!

Ally: I can see where the race gets its name; what place and time did you manage?

Westley: I finished 14th, in a smidgen under 34 minutes. The winner was a little under 30’, so the hills must’ve flattened out for him before piercing the sky for me to come around.

Ally: Ha-ha, got it, a lot of hills. Seriously though, a great run put in by yourself, Westley. Any parting thoughts?

Westley: Did I mention hillzz!? Ha-ha. Also: people do the race for the distinctive bobble hats that change colour and design each year.

Ally: That’ll be needed with those temps; much better than another technical T-shirt!

Westley: It sure was. I’ll hopefully be hearing from you in March.

Westley: I received an email from a race director declaring that I had a “free entry” to a 5K on March 18. It had previously been cancelled after the state’s governor ordered the first COVID lockdown in 2020!

Ally: Wow, that’s a director with a good memory. Well done again on a cracking run, and I’ll be in touch.

The Stable News called up The Stablemaster (nestling in a figurative heart of darkness) for his take on the Wolf’s wild run: “The Wolf went on the hunt and tackled those hills like a pro. The freezing weather would have scared away many a man, but Westley ripped through the cold air and finished very strong. Good man, Wes.”