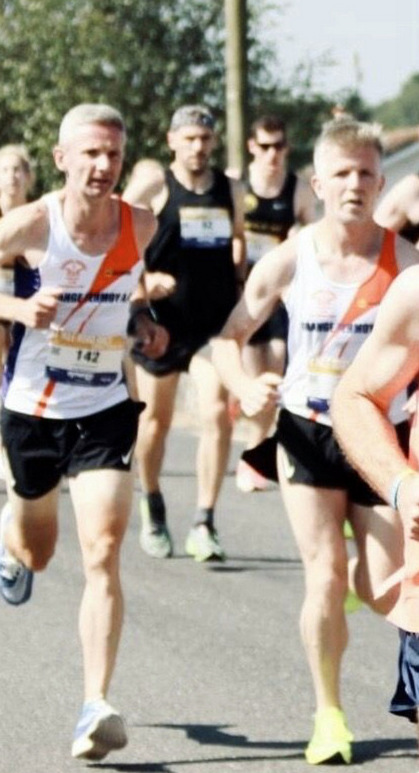 If you squint, you can see a pixel.

It was Stablemates galore at Sunday’s Grange-Fermoy AC Synergy Bob Burke 4-Mile Road Race, featuring an epic grudge match battle between David “Boy” Greene and Liam “Old Man” O’Connor. It was a literal David and Goliath battle, with Greene charging home in 22:10, bagging a 24-second PB, and “Goliath” O’Connor not far behind in 22:21, scooping the win for the M50 category, and a 30-second PB to boot.

The Stable News’ senior Fermoy correspondent, Ally Smith, was on hand to hear what each of them had to say.

ALLY: How’s it going, guys? Now, I want a respectable interview, with no pushing and shoving—you’ll both get your turn to speak.

DAVE: Hey, Ally. After a three-month break, post build-up to Wrexham, I came back with one goal … putting manners on club-mate and Stablemate Liam O’Connor. To be fair to the auld lad, he put the pin to my collar, but them auld fellas just can’t handle the heat—and it was a scorcher last Sunday. Mission accomplished! Even managed an official PB, which was great, especially after the few light months of training.

ALLY: Great stuff, “Davie Boy”; and are you happy with the PB?

DAVE: Yes, indeed. It was an official PB of 24 seconds, I think. I have probably gone faster in the middle of 10K TTs when in better shape, but on a lumpy course, I was happy with it. It was a very hot day, with a fantastic crowd at the race. I went out at an aggressive pace. Liam did try to trip me at the start, but I gracefully recovered.

The last mile or so was a real struggle and highlighted my lack of sessions in recent months, but all in all I was very happy with how it went.

LIAM: YOU RAN RIGHT IN FRONT OF ME! I DIDN’T TRIP YOU!

ALLY: Now, now, boys. Let’s all calm down. We know the starting line is a melee at the best of times. I’m sure it was unintentional. Right, Liam; what’s your take on the race?

LIAM: Cheers, Ally. It was a great evening. The weather was beautiful, with clear skies, and personally, I didn’t find it that hot. (Dave must’ve been feeling the heat.) My finishing time was 22.21. I finished 33rd overall and won my age category (M50).

ALLY: Outstanding running, ol’ boy. Bet you’re happy with that! Anything else?

LIAM: This race was organized by our club, Grange-Fermoy AC. The race was very well-managed by the club. The conditions were fantastic. Overall, I was delighted with my run. The first mile was very fast (5’17”), and I had to pull back my pace a little for the remaining three. I got home in 22:21, just behind my club-mate and Stablemate David Greene. I have no doubt if there was another 500 meters I would definitely have caught him!

DAVE: In your dreams, old man! You couldn’t catch a cold. We’ll see if you can beat me at the Munster Masters track 3000m on Saturday!

LIAM: I’ll be glad to! Even better when I spank you at the Charleville half-marathon and destroy you at the Manchester Marathon, hahaha. Don’t you go thinking a 4-miler is any indicator for the big boy races.

ALLY: Right, I’ve got work to do. I’ll leave you two to sort it out. Good luck in the races, and may the best man win. 😉

Ally left the pair squabbling and put a call into The Stablemaster himself, who was busy ordering titanium wrist guards, knee and elbow pads for his return to the bike:

“That’ll do nicely; no amount of pavement or concrete will break my super bones now! Oh, sorry, Ally. I was getting a bit carried away there. Ah, yes; Dave’s and Liam’s races! They pushed each other to greatness. One cannot be as good without the other. It’s like me and General Puffball; once long-time training partners, but when it came to race day I’d have shoved him down a ditch if I had half the chance, HAA HAA HA HAAA. Their “friendly” rivalry will do wonders for their racing, and I know they keep their easy runs at conversational pace with all the trash-talking they do.”