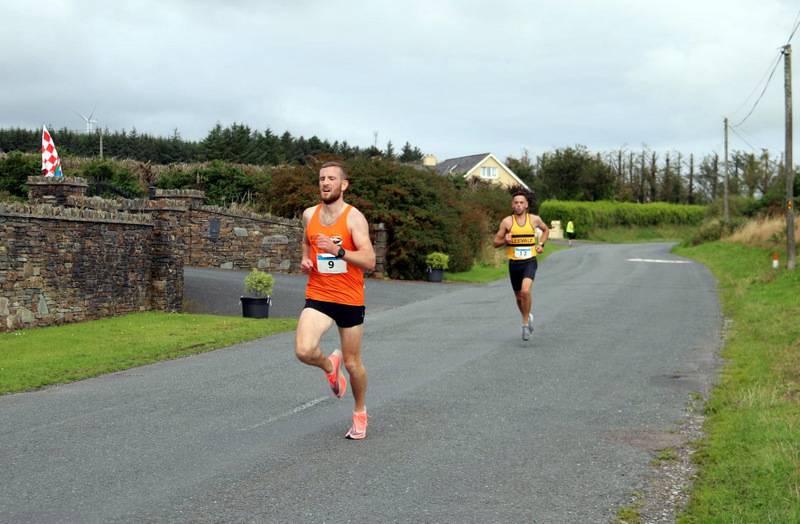 Stable newbie Denis “the Menace” Hegarty (24) had the race of his life at the Bweeng Trail Blazers 5K, running a gobsmacking 14:50, snatching third place, and smashing an utterly mind-boggling 61 seconds off his PB. Hegarty joined The Stable in February of this year, and the 24-year-old with tons of talent has been putting in the work with some monster sessions from Coach Stazza. A few lighter weeks in the run-up to Bweeng had Denis doubting he could crack out a good time—but boy was he wrong.

The Stable News hollered at Hegarty, heaving and spluttering after his effort, to get in the press conference for a world exclusive on his astounding run:

“Race was brilliantly organized by Stablemate Gary and Bweeng AC. Personally, I wasn’t expecting much from the race, as I hadn’t the work done to justify a good time. Did the warm-up and felt terrible, stood on the start line, and took off fast. Felt even worse by 1K! 2K-4K was rolling hills, so I struggled through these, but I knew the last K was downhill, so I just kept as close as I could to the front through this section of the race. Got to the last K feeling worse than ever, and just went for it, passed two athletes, and got third—delighted.”

Hegarty’s heroic effort had not gone unnoticed by Coach Stazza, who was busy signing autographs in the press junket and charging €10 a pop for a picture: “Denis, my boy! Where on Zeus’s earth did you pull that run from? Absolutely brilliant! Now you relax and take it easy for a few weeks, and then we’ll get back to work … a picture? … sure; 10€, and I’ll be glad to.” 😉

Assistant coach Ally “the Chin” Smith, busy handing out Stazza’s Stable promotional flyers to racers, quickly quipped this about Hegarty’s race: “I’ve been keeping an eye on Denis since he joined the group, and boy has he some engine on him! I can’t wait to see what he can do with a solid block of training and a good taper. Great run, Denis, well done.”

Some big compliments from his coaches for the youngster—but Denis isn’t fazed:

“I’m taking it easy for the next few weeks. Will do a few more races but not expecting anything major from them.”