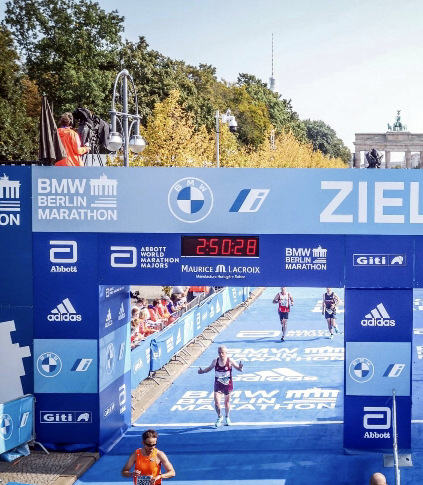 People on (a) Sunday.

Stablemate Stephen Rooney buried his Teutonic demons and sliced six minutes off his PB with a scintillating 2:49:58 at the Berlin Marathon.

Rooney resented the unfortunate 20℃ temperature and 100% humidity but adjusted accordingly to finish 547th out of almost 25,000 participants and 60th place middle-aged-has-been.

After a well-earned rest, Rooney was ready to relive the race and met up with Ally “the Chin” Smith at the Castle Cafe in Cork:

Ally: How’s it going, Stephen? I’ve already ordered us a couple of Guinnesses—to help with recovery, of course. Fill me in on Berlin, then.

The adrenaline was flowing on Sunday morning, and the goosebumps arrived when the organisers played “Sirius” by Alan Parsons over the speakers as the start time approached.

I was hoping for a 2:45-ish time. However, from early in the race, everything felt a lot tougher than it should have done. After five miles, I decided to sit at the 6:25 pace and see how I felt at mile 20. I’m glad I did: otherwise, I would have struggled towards the latter end.

There were a lot of people who pulled out around halfway due to the weather conditions—and even more at mile 20. When I reached mile 20, an executive decision was made to just stay at this pace and take whatever time I would get.

A good friend of mine told me that, Once you see the Brandenburg Gate, give it everything you have, and that’s what got me in sub-2:50. I even managed a negative split by two seconds.

Ally: What a run! Fair play on adjusting to the conditions and charging to the finish. Anything else lined up this year?

Stephen: I’m hoping maybe to finish the year with a half-marathon PB and also do some 10K and 5K races, depending on how the legs recover.

Ally: I’m sure these Guinnesses will help with that, pal, ha-ha. Ready to order?

The Stable News put a call through to The Stablemaster, who was filming his new “Stazza-Yoga for Ultimate Performance” DVD: “Blimey, I’ve not touched my toes for years! This system works! Pre-order for €99.99 and get a FREE STAZZA SIGNED PHOTO! Anyway, what’s young Rooney moaning about? Sub-2:50 in hellish humidity is alright in my book. Well done, Stephenovich; I hope you’re ready for the training to spank all those other PBs.”