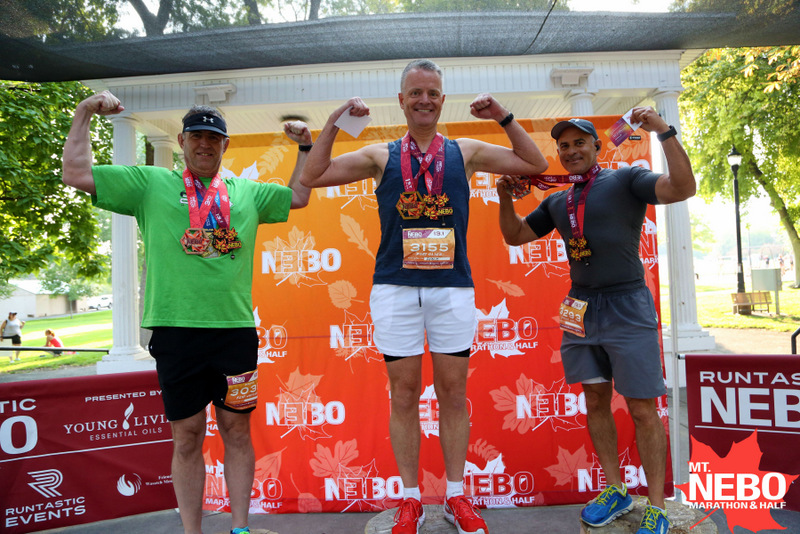 Dubbed the “Benjamin Button of running” by Coach Stazza, Stablemate Kurt Olsen (57, although he doesn’t look it) hit a hat trick of half-marathon PBs, along with an M50 first place, by storming down the Mt Nebo Half-Marathon in 1:27:54—a full 1’05” quicker than the Big Cottonwood Half, three months prior. Olsen was no slouch among the top finishers. Holding back the years, he placed 53rd/798 and, of course, claimed that all-important M50 win.

Standing at the back of the line before dawn, Kurt had the attire of a man ready for a PB—a skimpy singlet and the ever-growing-in-popularity 2-in-1 shorts. The 55°F temperature made for perfect running weather, except for some smoke in the air from the California fires.

As Kurt is rolling back his years, The Stable News sent the youngest member of the team, Ally “Tic Tok” Smith, to get Olsen’s thoughts on his performance:

Ally: Hi, Kurt. I’m so pleased to finally meet you in person. Don’t tell the other Stablemates, but you’re my favourite. How’d it go, then?

Kurt: This race had special meaning for me, as I dedicated it to my daughter Annie, who has just been diagnosed with cancer. For her, I wanted to go all out and give it everything I had.

Ally: Sorry to hear that, Kurt. I know Annie will be strong, like you two, so she’ll smash her battle. No wonder you went off like a rocket with that on your mind.

Kurt: Thanks, Ally. The crisp early morning air at the starting line (7,900 feet) was perfect for running. This is a course with a lovely downhill grade basically the entire way. For those who think that’s unfair, we Utahns (aka Utahans) live right next to spectacular mountains, and most longer-distance races are planned on downhill routes. So get over it! 😊 Trust me, if you lived where downhill races were predominant, you’d be running them too!

I ran out of prep time because of very long bathroom lines and ended up at the back of the pack when the gun went off. So, mile one involved passing approximately 700 people (not exaggerating). Then I kicked up the speed for miles two-nine at a pace faster than I expected.

Mile five got a bit dicey. First, for some reason, my phone came flying out of a pocket in my 2-in-1 shorts (which Coach Stazza strongly promotes as the latest fashion) that was supposed to be secure, bounced off my foot, and hit the road. I ran back, grabbed it, put it back into said pocket, started running again, and it flew out again 10 seconds later. When I picked it up, the screen was shattered. I might have said a bad word under my breath.

Then I started feeling hot spots on my heels. Shortly thereafter, I felt them blossom into large blisters. Lovely. Downhill courses can cause more blisters because your feet tend to slide forward in your shoe with each step. The racing shoes I had chosen probably needed a few more miles on them, and I should have tied them tighter. The farther I went, the more uncomfortable the blisters became, and then just plain painful. My thought was: my daughter has been (and will be) going through pain far worse than my heel pain, so I pushed through it and refused to slow down.

My pace dropped somewhat over the last few miles, owing to some rollers, but I kept pushing the best I could. I was so happy to cross the finish line and realise I’d trimmed over a full minute from my PR and averaged a 6:42/mile pace! I was supposed to run seven more miles to complete a scheduled long run, but I started wondering about my feet.

I looked down at them and discovered that my shoes and socks were soaked in blood. The blisters that entirely covered both heels had torn open and pushed back, and I was running on raw skin. Ouch. No more running today. But as I retrieved my results tag and discovered I had taken first place in my age division, I was so happy! I had endured pain, pushed through it, and got to the finish line, in a small act of solidarity with my sweet daughter, who has a very difficult battle ahead of her.

Ally: Wow, wow, wow. What a race. Blood, sweat, and, no doubt, tears have gone in and come out of this race! Absolutely fantastic. What a result for you, and my thoughts and prayers, along with all the Stablemates, are with Annie for her battle ahead.

Back on the Emerald Isle, Coach Stazza was getting a tattoo (on his massive gut) of “Ireland,” with “Éire” underneath:

“Ouch! That stings a little, doesn’t it? I’ve got a surprise for the Stablemates at this year’s Christmas bash. You’ve heard of Stavros Flately? Well, now it’s time to meet Stazza Fately! I’ll be performing Lord of the Dance, and I might rope in the Tralee Irish Dancing Association to accompany me.”

“Oh, sorry. I’d forgotten. My pain tolerance is pitiful. Ah, yes. Young Kurt and the fantastic family he has. They are the most kind and incredible bunch of people, giving up their home when we were in Utah and organising a whole host of gatherings for us. They are so strong. Kurt’s run showed that, and Nanci doing the 10K shows the love and support they have for their daughter through running. My thoughts are with them as are those of the full family of Stablemates—great job, Kurt and Nanci.”

Oof. After that emotional speech, we’ll sign off in typical Newsworthy fashion: Kurt’s next race will be the Berlin Marathon on September 26th.