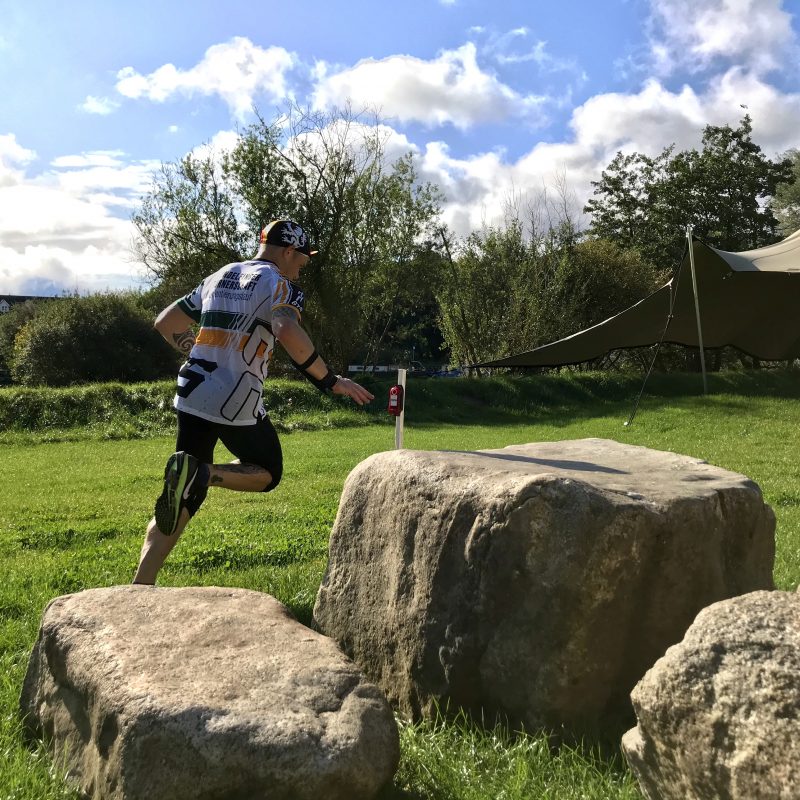 LOST IN THE MOMENT: Jens running around in circles, looking for the thingamajig

Start to c1: I went off ok, there was a run into the start point. I had to veer east through a marsh. I had a good compass direction and hit the first control from the top and with confidence. Apart from the marsh, it was dry and easy running.

To c2: heading north contouring along the terrain, I made sure I had I stayed on my compass bearing. good visibility in the terrain. I climbed a little bit as I got slightly pulled by a gully. Running was more difficult through marsh, sinking in up to my ankles at nearly every step. I was looking for some animal trails to follow but it was difficult. The grass was nearly waist high which didn’t help.

To c3: I tried to concentrate on smooth running downhill through deep mud not seeing where I was stepping and trying to keep my bearing. Executed the leg good enough but a bit hesitant into the control circle.

To c4: I set the bearing, looked up, saw a couple of rocks up on the hill at the far side valley and figured these are the ones. So headed up there. Tough going again on a steep climb. I was so sure that I didn’t even look around as I was heading up there. Otherwise, I would have seen my control. So I wasted 11minutes.

To c5: I was able to let go of that massive mistake and head up to the next control and got that clean again.

To c6: this control was in the woods. There wasn’t really a route choice. Back down to the river and up the other side. Luckily I had a target up ahead. A runner that found c4 early than I did and I guessed he had a 3 min lead on me. There was a track made by previous runners but it was also hard walking/running as I was sinking in again with every step. I couldn’t find a rhythm again but eventually made it to the track halfway up the hill. I was able to gain on the runner here. I planned the route ok. However, as soon as we got into the green I had difficulties to make out the details on the map and slowed down. The map was muddy from all the falls, so was the compass and magnifier. I followed a gully to end where the control was. Now a compass bearing to the next control…

To c7: it was uphill with low visibility in thickets. It was slow going and I made only slow progress not really sure were I was but the heading was correct so I kept going. Got onto a track which I anticipated. From there I got the control easy.

To c8: through the forest and out into the open again. It was fast running here until I came into the open. I dropped the other runner here. I took a beating again in the open and it was once again hard going through the open mountainside.

All the rest of the controls I got clean. I got frustrated towards the end not being able to find a rhythm for running and it felt more like falling. At this point my feet and shoes were so wet I kept moving in the shoe. I didn’t want to pick up an injury so that slowed me a bit.

I am not a fan of Open Mountain Running, especially after the rain we had in the past few days.  It left a bit of a sour taste of what was actually a good run.

I need to find the positives in the next few days from this so not to get too negative.