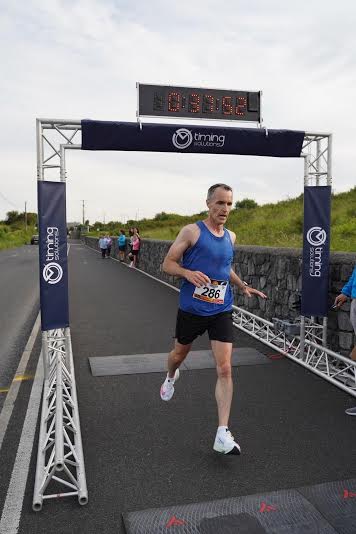 The sense of an ending.

Stablemate John “the Software Boss” Burton took a masters win—and second overall—at the Summer Solstice 10K in Ennis, County Clare. John bossed the course in 36:14, taking one minute and thirty four seconds off his previous PB from February 2020. The Stablemaster 10 TTs, where he ran 36:18, gave John the confidence to go and push the pace in his first race since. The weather (15OC with a light breeze) was perfect; it did not bother Burton while he charged round the triangular route.

The Stable News sent our young Jedi, Ally Smith, to track John down at the hyper-secure Transact Campus software centre. Once through multiple scanners, X-ray, and a full, ahem, “search,” Ally composed himself and got us this juicy exclusive:

“It was great to get out and do a real face-to-face race again. The start lined up in pods of 20 or so runners—with everyone socially distanced. Each pod went out with about a 30-second gap between them. You could pick any pod to go out with. I went out at the back of pod four with a couple of lads from my local running club. It was a real buzz at the start, heading downhill, passing a load of runners at speed.

After about 1.5 miles, I’d passed the majority of runners in front of me and couldn’t see anybody else. Given that the pods were staggered in terms of start times, it was impossible to know how well you were doing; if there was anybody a mile down the road ahead of you, or if there was a faster runner starting 15 minutes behind you. It was a bit strange in that respect and took away the buzz of targeting someone ahead of you and trying to pick them off. So, I just put the head down and got on with it. The course was fair. There were a couple of hills thrown in for good measure with one decent ascent about a mile and a half out from the finish. But what goes up must come down, and the last mile was a good place to pull back some of the time lost going up the hill.

All in all, I really enjoyed it. When it got uncomfortable, I just remembered pushing through some of those tougher Wednesday night Stazza-special sessions—you know, the ones I look forward to each week ⁉️—so I knew I had the training in the bank, and it genuinely gave me more confidence. It is great to see the consistent training paying off. I am hitting times I didn’t think I’d ever be running, and it’s giving me the confidence to try pushing even further. I’ll either get faster, or age will catch up with me, but it won’t be for the want of trying.”

Once Ally got back to the office, he started swinging his lightsaber (a small stick Coach Stazza gave him) and, in between shzoom noises, stated, “Running well, John is; the Force is strong—feel it he can.”

Enough of that nonsense, Ally! Go call Coach Stazza to get a quote:

“Alright, ‘Ally Bally Bee?’ You practising your Jedi skills? Just watch out for General Puffball’s head; we need that to tidy up all your grammatical errors, ha-ha. Ah, right, John’s run … he ran an excellent race, held the pace well, and got it done. Next time, he’ll get the overall win.”

John’s enjoying an easy week of running before The Stazza Sessions start up again for his next race: “Dublin Marathon in October is the main target, if it goes ahead. I’d also like to get a half-marathon on the cards, but I’m not sure what’s on. Maybe runners in Stazza’s Stable know a good half worth doing in advance of Dublin. I’d really like to do the Charleville half, but I haven’t heard if it’s happening or not.”

In further correspondence with “the Jedi Kid,” John mentioned that the village locals think he’s a bit of a nutter! Though his running club-mates kept an eye on him during the sessions, they were not too eager to jump in. But he’s working on convincing them to join The Stable. Maybe this result will get them thinking?

“Misery loves company. ☺” We couldn’t have put it better ourselves.