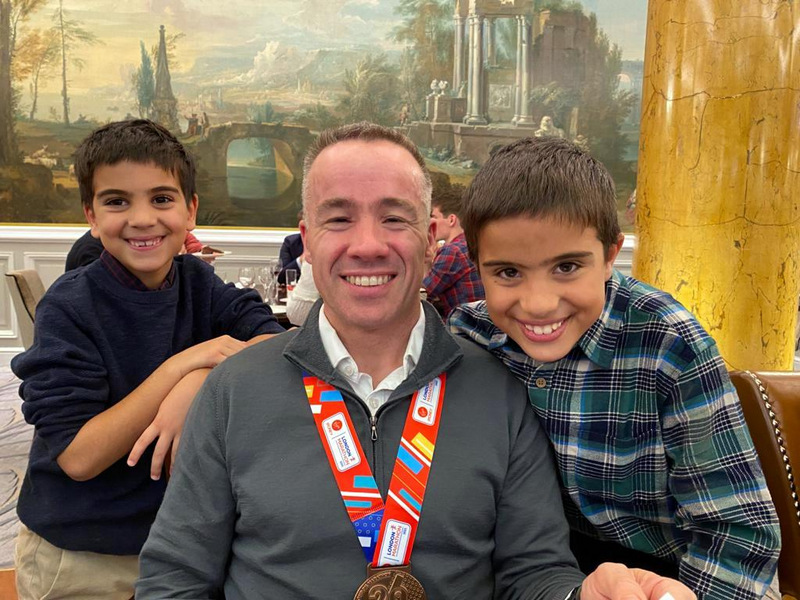 A trio of Calhouns.

Stablemate Rob “Hooner” Calhoun put in a platinum performance at the London Marathon, running 2:54:42 to take well over 15 minutes off his PB. The sports mad family man finished 1421st overall and 192nd in the M45-49 category.

Calhoun couldn’t have been happier with the weather: “Great conditions … 11-14℃ and dry, with some sunshine and a mild breeze, for the most part.”

The Stable News’ junior reporter extraordinaire, Ally ”the Chin” Smith, gave Hooner a holler to hear all about it:

“Started in wave one, alongside fellow Stablemate Dan Domeniconi. Ryan Carley also came and introduced himself to us in the waiting pen. The week running up had thrown up a few challenges, including both children having a sickness bug. This meant my sleep wasn’t ideal. But thankfully, I did avoid the bug myself.

My big 18-miler had suggested a 2:46, but two or three of my latter sessions suggested I was not firing on all cylinders. So I wasn’t sure I could head off at 6:20 per mile. We decided to go off at 6:30 for mile one, and then 6:25ish—and I just hoped that I would feel it.

For the first half, it felt good, and we found a great rhythm, with each mile growing in confidence. All the time, I had in the back of my mind some of the muscle fatigue that I had felt in the run-up. I took a Maurten 320 gradually over the first hour and then a further three gels … A caffeine gel at 13 and two further gels at circa 18 and 22. Perhaps another gel would have been sensible.

Looking at my official splits, my fastest 5K was 19:40 between 15-20km, and perhaps this took too much out of me in hindsight. I managed to hold it, albeit losing a bit of ground on Dan, until around 35km. But it was really beginning to hurt. And the last 7km was a battle. Retching at times, and slowing to a brief walk to give myself some physical respite as well as a good talking to.

Some of the expletives I expelled did not show due consideration to the families lining the streets! During those last five miles or so there were old friends and running club-mates giving me the incentive I needed to get me through. My wife and two kids and my parents were in the grandstand at the finishing line, which was great to see. I only wish I could have been doing the finish I’d envisaged!

A few days on, the disappointment of not being able to hit the sub 2:50 has subsided. I am overall delighted to have comfortably joined the sub-3 (and sub 2:55) clubs. But I can’t get away from the fact that there is some unfinished business!”

“Epic running, Rob. Pushing on for a 2:54, even though you had a short visit to the pain cave, is gutsy work, ma man. Anything coming up?”

“I have a HM in February. Given I started my running journey at the beginning of the pandemic, I have some proper races to attend, and some shorter distance PBs to set. At this point, I feel that is the way forward, with an autumn marathon in 2022 to aim at a quicker time.”

“Fantastic, pal! I can hear the hunger in your voice. Happy training, and I can’t wait to see the HM you batter out in February.”

Coach Stazza was straight on The Stable Newswire to give his take on Calhoun’s career: “The Bossman of ‘the Richmond Firm’ put in a sterling effort. Sub-2:55 while retching and walking towards the end means there’s tons to come off! Let’s get down to business!”