GREENE VS. O’CONNOR 2: SPRINT TO VICTORY 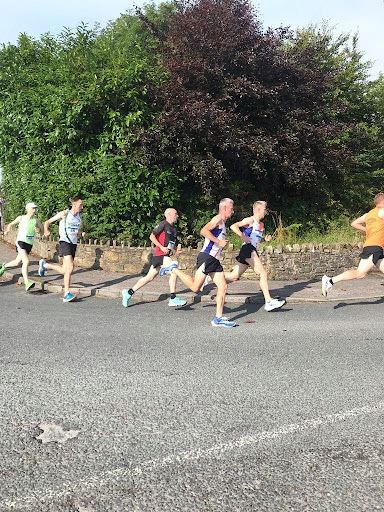 They're in there somewhere.

The Bweeng Trail Blazers 5K was overrun with Stablemates this past weekend, and top of the bill was another epic shoot-out between David “Young Boy” Greene and Liam “Old Man” O’Connor. Picture the scene: a beautiful sunny Sunday morning (without a cloud in the sky), with the slightest of breezes, made for perfect conditions to run fast. Both men would manhandle their way to big PBs, with only a gnat’s hair between their times! Greene with a superb 16:28 (a 13-second PB, good for 18th place), and the Old Man himself a mere three seconds behind in 16:31, good for 20th place, but a staggering 50 seconds faster than his previous best. To top it off, he earned another M50 win to add to his collection.

The Stable News’ press junket was awash with volunteers and other media outlets competing for the attention of Coach Stazza, so newsboy Ally “Fair Fight” Smith took them around the back for all the goss:

Ally: Good morning, gents! Now you both know the rules: keep it clean, listen to my instructions, and let’s have a good, clean fight. Age before beauty, as they say. Liam, how’d it go?

Liam: Cheers, Ally. This race was organized by Bweeng Trail Blazers AC. The race was very well managed by the club. The conditions were fantastic. Overall, I was delighted with my run. The first K was very fast downhill, so I didn’t go mad and stuck to my race strategy, which was 3:20 per km. The remaining 4K went very well for me, averaging 3:18 per km and crossing the line in an overall time of 16:31. Not bad for an old lad.

I finished just behind my club-mate and Stablemate David Greene. I have no doubt if there was another 100 meters I would definitely have caught him, as he was fading badly on that last K. I just left my sprint too late! Coach Stazza has a plan in place for me working on that sprint finish.

Ally: I wouldn’t be divulging tactics in front of the opposition, but it shows your confidence. Excellent race, Liam! Now, Dave, keep it clean; I can see you foaming at the mouth for your chance to counter.

Dave: Yeah, a straight right cross ought to sort him out once and for all!

Ally: Right, Dave, that’s enough. Get on about your race.

Dave: Sorry, ref Ally. It was a fantastically organized race with a strong field. I’ll definitely be back next year! The course was very fair, with a downhill start and finish. The middle two miles were on rolling hills. ‘Twas a great blowout! But most satisfying was putting my good mate Liam O’Connor to the sword again. 😊 He wasn’t even close enough to try to trip me this time around.

Liam: WOULD YOU STOP GOING ON ABOUT THE TRIP THAT NEVER HAPPENED! I WAS BREATHING DOWN YOUR NECK THERE! NEXT TIME I’LL HAVE YOU, GREENE!

Ally: Break it up, break it up! That’s enough. A great race by you as well, Dave. Now away and cool down, the pair of ye. And I mean properly—MYRTL THE LOT!

Back in the press junket, Coach Stazza was dishing out bacon rolls with HP sauce for everyone and heard of the scuffle between Greene and O’Connor: “Oooo, round two between the boys seems to be heating up! Great racing by them both again, and Liam’s right; I have a secret sprint session to help him pip Greene at the line, but he won’t use it straight away. We will wait for the right time to strike. No offence, David. I love you too, as you are all my children, but Liam needs a little more of my attention to beat you, his younger ‘sibling’.”

The battles continue for the friendly rivals: they will be featuring in the Mooreabbey 10-mile this Sunday, and then it’s on to the National Masters 5000m the following Sunday. Then it’s the main events: the Charleville International Half-Marathon on the 26th of September and the Manchester Half on October 10th.