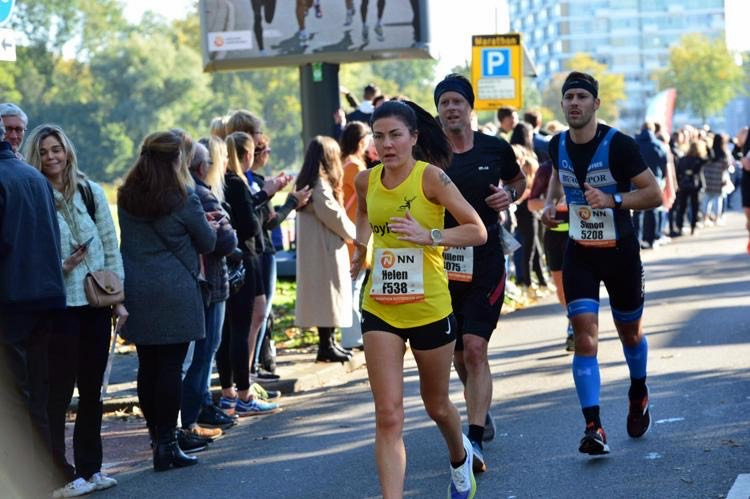 This could be Rotterdam or anywhere.

Stazza’s Angel Helen Beirne obliterated more than 16 minutes off her PB at the Rotterdam Marathon, clocking 3:25:31 in the land of tulips, clogs, and windmills.

Beirne reported that those windmills and tulips were picture still in the most perfect of running conditions—cool, calm, and bright! Although, she remarked, “nowhere to hide if things go wrong, lol!”

The Stable News’ roving reporter, Ally “the Chin” Smith, cycled the 256 miles (his car was in for an MOT) to catch the ferry from Hull to Rotterdam for a face-to-face with Beirne:

Ally: Phew! I made it. Helen? Great to meet you; how’s it going?

Ally: Fantastic, Helen; that’s an insane PB. What else did you take from the race?

Helen: When I joined The Stable in March this year, I was nervous about the style of training—the long tempo runs were not something that had been part of my previous training plans. But I’m up for anything (within reason!). I said I’d give it a go, and after an early adjustment to the training paces, I got used to the long, torturous runs Stazza loves to dish out on a Sunday while he’s eating crisps and drinking wine, and my fitness and endurance have benefited massively. It was a big adjustment, but all the hard work paid off, and I feel much fitter and more confident going into races.

Ally: Hahaha! He does love a glass of wine, and it’s great you are embracing the training. It all pays off when you get results like that! What’s next for you?

Helen: I am 15 min under the qualifying time in my age category for Boston, so I will be applying for that, and if accepted, I’ll be putting myself through it all again in April. That would be major number three for me—Berlin and Chicago already done.

Ally: Wow, wow, wow! You’re bound to get in with that time and get that ticked off the majors list. If they don’t, I’ll be chapping their door for a word, ha-ha.

The Stablemaster Skype’d in from Antalya. Halfway through his Turkey teeth treatment, he mumbled: “Hewen wan a bwilliant wace. Can ooo hear me OK? A sooper PB, an’ well under Boston qualification! Great stuff! I need more painkillers (wine)!”