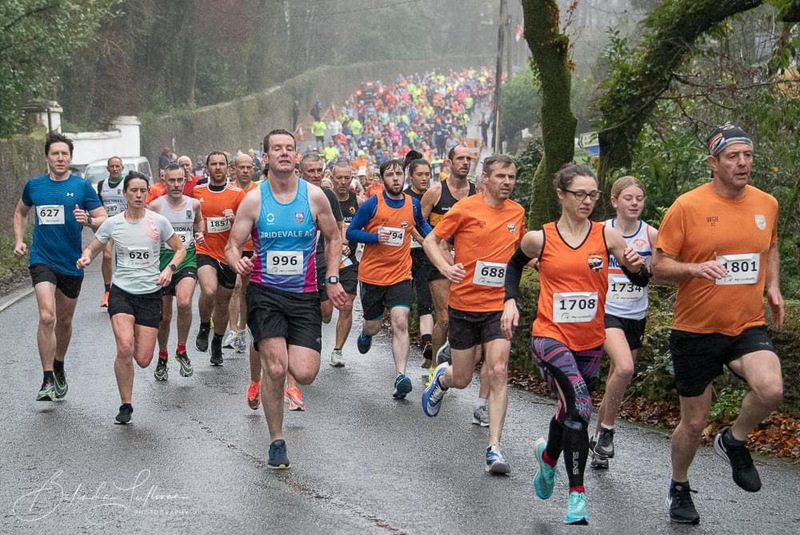 The international man of mystery sequestered a staggering two minutes off his best (from the same race in 2019), placing 48th overall (eighth M45) in cool and calm conditions.

The Stable News’ wannabe detective, Ally “Columbo” Smith, was hot on the heels of Mystery Mullins, capturing his man and dragging him into The Stazzamobile for an interview.

Ally: Beeep! Commencing interview with Dave Mystery Mullins. It is Sunday, November 28, and the time is 12:05pm. Now that the formalities are out of the way, Dave, tell me all about this run, then! You’ve been on my radar for quite some time.

Ally: Come on, Dave, spill the beans. You’ll get a much lighter sentence from Judge Stazza (i.e. a recovery week!).

Dave: Oh, alright. Anything for an easy week. Well … It’s a tough course, with a hill just after half a mile. Once you get over that hill, it’s downhill for a few miles, and then it’s an incline again up to the finish.

This was my first official short race in two years, and my first race after the Manchester Marathon. I forgot how tough these can be, as I need to be running flat out for the four miles.

Ally: That’s it, spill the beans.

Dave: Stop pressuring me! I’ll tell you all you need to know.

My plan was to take it easy for the first mile with the hill and then push on from there. I probably went off a little too fast but felt OK. My fastest mile was actually mile three. I did need to grind it out for the last mile. My lungs were really feeling it on the last incline up to the finish line. The last mile was my slowest. Hoping for a little quicker but overall happy with the PB. It’s good to remember how it feels to run hard for a short race after months of marathon training. Hopefully knocked off a bit of rust, and I will make a real go of taking some time off my 5K PB next month.

Ally: Well, well, well. Who’s a clever boy, then? Chirping away like a budgie, ha-ha … And I have to say … A very impressive run! You should be shouting it from the rooftops, not keeping it all to yourself … Well done. I’ll see you in the morning for your release.

Dave: What?! I told you everything!

Ally: It’s company policy, pal. A night in The Stable Cells will give you some extra reflection.

The Stable News bell’d The Bossman, Coach “Judge” Stazza, for a few opinionated words on the matter: “Atta boy, Dave! A storming performance, and all the sweeter giving Columbo the runaround. A marvellous, rust-busting PB run—well done, son!”

Mullins’ next outing will be a 5K in Newmarket on December 19.