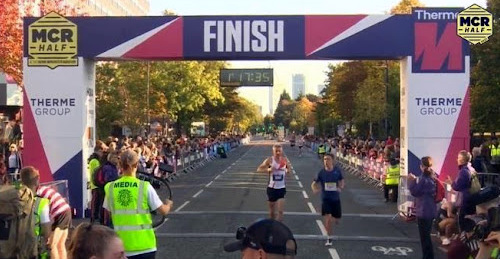 Categorically the best O/50 runner out there, O’Connor was again top of the class, with another M50 win and 53rd overall.

Flying into Manchester the day before with his club-mates was a wise move from the old owl—keeping calm and collected until go time!

The Stable News’ paperweight, Ally “Sumo” Smith, stomped over to the finish line spread for some sausage rolls and a catch-up with the flying Irishman:

Sumo: Liam! Liam! C’mere for a chat and some buffet. That was a cracking run again, ma man.

Liam: Cheers, Ally, don’t mind if I do. Better get some before Dave Greene gets here and stuffs it all in his pockets for the trip home, hahaha.

Sumo: That’s if there’s any left by the time I’m finished. Get to the nitty gritty, pal. PBs, pacing, pontifications—please proceed.

Liam: It was a half-marathon PB for me. I was 1’17” quicker than my previous official PB time of 78:47, which was from the Charleville International Half-Marathon on September 26. The conditions were ideal for racing. The weather was calm and cool, which, combined with a flat course, made for a very fast half-marathon—for chasing a PB.

Myself and the young lad Dave ran the race together, until the business end, where I just got away from him! Following the ideal pacing for the course given to us by Coach Stazza, which we executed all the way, worked out perfectly for us. Thanks, Coach. I was thrilled with my run and crossing the line in an overall time of 77:30. Not bad for the old lad and another PB and category win in the bag. Just going to mention this also, Ally; you were right when it came to long races. That’s three-in-a-row for me over the young fellow.

Sumo: Brilliant running, Liam; just call me “the Psychic Scot!” I knew you had the experience and will to take the youngster! Are you for having a rest after a super season?

Liam: Taking a week off after Manchester and then going back to do a few cross-country races with my club, Grange-Fermoy AC.

Sumo: Well earned, buddy. Pass me that plate of vol-au-vents, and I’ll be on my way!

The Stablemaster flew into The Stable Newsroom like a man possessed: “Did you guys see that? Liam’s 77:30 topples his last run, and I said that was the run of the year! The Stazza’s Stable Awards are gonna be hard to judge. Outstanding, kid; simply outstanding!”