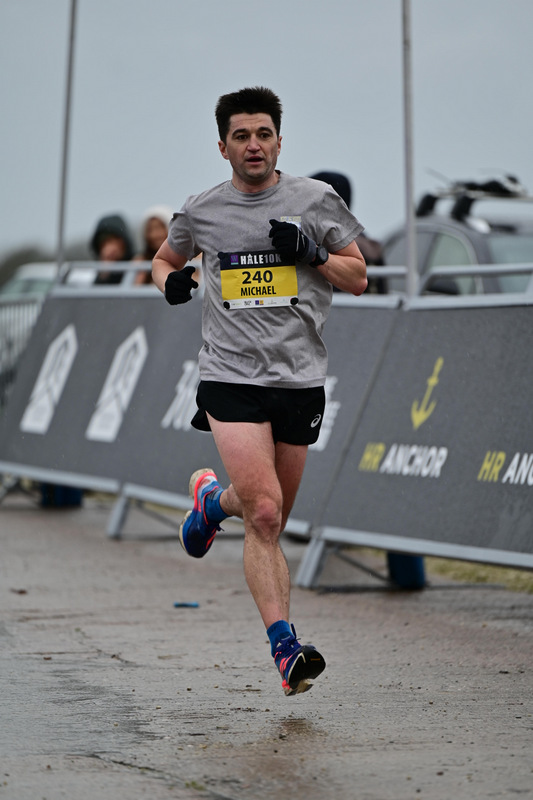 Stablemate and all-round good guy “Magic” Michael Powell thrusted and gyrated his way to a screaming 35:34 at the Hale 10K, finishing only a fistful of seconds off his best showing from December 2021—must’ve been a Christmas night out for the Liverpool lasses.

Powell stood glistening from the recent rainfall, and his tousled locks blew effortlessly in the strong winds of the storms battering the UK. But not even those screams and whistles could break his steely mien.

The Stable News grabbed a few seconds with the Magic one before he was swarmed by his fans:

“I enjoyed the race around a nice village; they are really passionate supporters here.

The testing conditions on a hilly course made for a few moments when I had to ride it out, but it was a great test of character and ability.

I felt good throughout the race, but maybe I was a bit over cautious with the strong winds; we only learn from these experiences.”

Ally “the Chin” Smith was atop the Stable News building (replacing roof tiles from said storms) when he heard of Powell’s pumping performance: “Another solid run from Mikey! I thought there was no way his hips could move like that after his operation—how wrong I was. Very well done, Michael, and that PB is close to falling; you heard it here first, folks.”

The Stable News contacted Coach Stazza, who was busy ironing plenty of white linen trousers for his stay at Diani Beach, for a quick quip: “I’ll need about fifteen pairs for a ten-night stay. I’m infamous for being a messy eater, and one drop of red wine or wild berry jus on these, and they’ll be ruined. Can’t be walking about half-naked, hee-hee.

No fear of that for you, Michael! You’re most com-fart-able in short shorts and the wind (machine) in your hair. A ravishing ransacker of a run … Nice one, son!”

Magic Mike is training hard and getting the routines done for his next big show on March 27 at the Liverpool Half-Marathon.