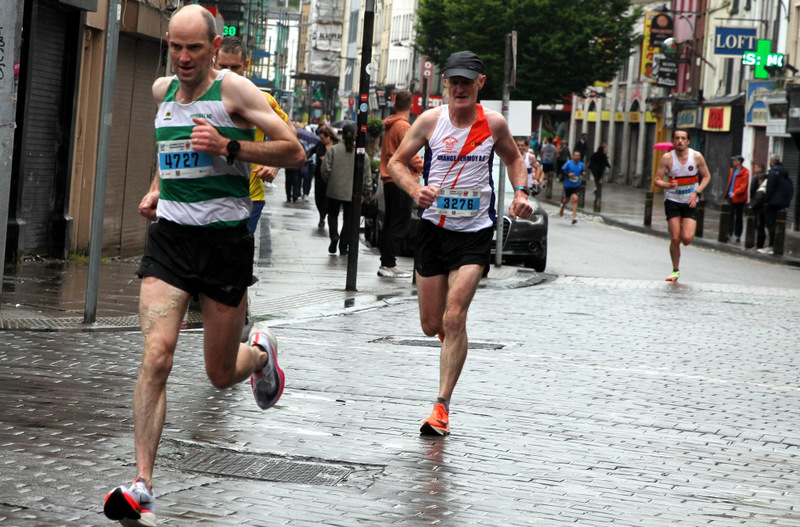 Stablemate Sean Ahern pounded the streets of Cork for 13.1 miles and came away with a sensational, 3’53” HM PB from his 1:18:38 clocking. The construction industry salesman was well up the leaderboard, placing 26th overall and a very respectable second M45. See what happens when you leave the briefcase at home!

The Irish weather was on form for the thousands of participants, bucketing it down from dawn until dusk. Rumour was they packed up the water stops, as runners were sucking their vests for hydration.

The Stable News shipped Ally “the Chin” Smith to the Rebel City to hear from Ahern:

Ally: How’s it going, Sean? Let’s hear all about it, then.

Sean: Hi, Ally. A very well-organised event. Not an easy half—especially the middle third of the race, with a lot of turns and inclines. I raced my first race in almost two and a half years a few weeks ago over four miles, so going into the half, I didn’t know what to expect.

Ally: Oh yeah, that’s a bit of a jump alright. All go to plan?

Sean: The plan was to not go off too hard for the first few miles and gradually pick up the pace. I got into a nice group early on, and the pace was comfortable. The gradual pickup never happened, though, and we kept a nice steady pace throughout. I had a strong finish, and so was happy overall with the way it went.

Ally: Very well done, Sean. Seems there’s plenty of time to take off yet, if that was a comfortable charge. Anything else lined up?

Sean: Thanks, Ally. I’m doing the run leg (which is another half-marathon) as part of a relay team for IRONMAN Ireland, which is being held in Youghal in mid-August. This ties in perfectly for the Dublin Marathon in October. I’ll try and throw in a few short races throughout the summer. I haven’t raced in so long; all my PBs should be smashed!

Ally: Attaboy, Sean. I’ll be seeing you plenty, then, ha-ha. You’ll get sick of the sight of me.

The Stablemaster FaceTimed in to the News to convey his pontifications: “Ah, as I sat here in my new Egg chair (they’re all the rage, you know), smoking this beautiful Cuban cigar; I thought to myself: What an unbelievable performance from Sean Ahern. 30 months out of the game, and he comes back with an almost four-minute PB.

I had to call up and share my epiphany with you lot. Wondrous, my boy, simply wondrous.”