MOLLOY JINGLES ALL THE WAY 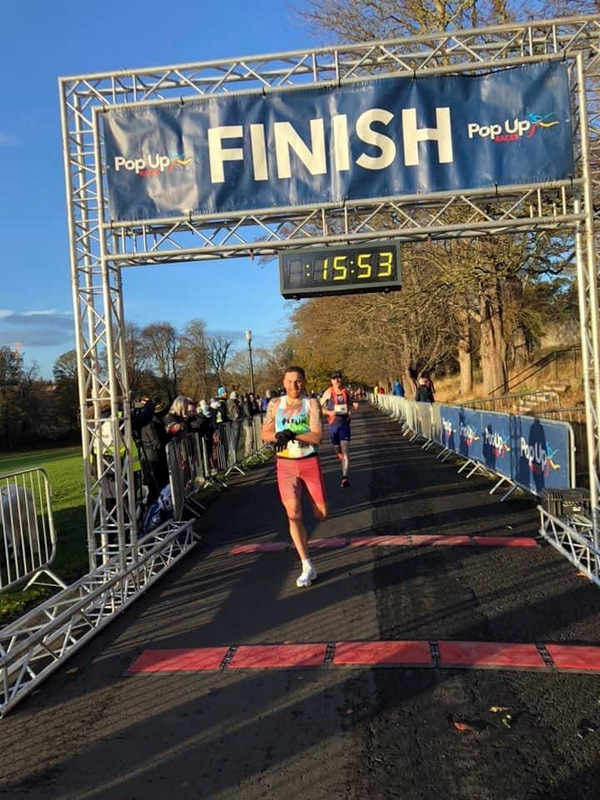 Oh, what fun there was to have in the Jingle Bells 5K for Stablemate Ciaran Molloy! Ploughing through the frost like a one-horse open sleigh, Molloy clocked 15:53, taking a tinsel topping 29 seconds from his official PB (and 14” off his TT best).

Pantomime baddie (he’s a tax manager) Molloy described the weather as: “Freezing cold, with a biting wind! So cold you wouldn’t put your mother-in-law out in it … Well, maybe!”

The Stable News popped round to Molloy’s gaff with a box of Quality Street and some ginger wine for a review:

“I absolutely loved it. First race in a long while, with a fantastic standard; there were some former Olympians racing and also national 1500, 5K, and 10K champions.

I started pretty reserved and kept close to some people who were looking to run 15:40/15:50. I had set my watch up totally arse ways, so I had no idea of pace. But it was the best thing ever, as now I just raced what was in front of me. From the 1km mark, I was never passed. I held my ground and passed a number of people over the last 2km. I was buzzing at the end.”

Frolicking in the fields of snow beside Stazza Mansion, The Stablemaster and Ally “the Chin” Smith were giggling like a couple of schoolgirls on a sleepover:

“Hee, hee, hee—stop tickling me, Ally! I’ll throw some snow down your back!”

“Oh, please don’t! Thanks for renting the snow machine, Coach! It’s great fun and so realistic!”

“Can’t have my ickle Ally not having a white Christmas! Talking about Christmas, did you see Ciaran Molloy ran 15:53 at the Jingle Bells 5K?”

“Indeed, I did; he’s some runner, that boy! A superb achievement!”

“Oi, you! Cut it out with the snowballs for a minute … As I was about to say: Ciaran has huge room for improvement. He has so much potential, and I can’t wait to see how far he goes in the future.”

Molloy’s potential will be put to the test, as he has his sights on a couple of top-flight races next year: “Probably the Tom Brennan 5K on New Year’s Day or the Raheny 5-miler at the end of January. Both are fantastic races that draw a high standard of runner, so they could help push me on to quicker times.”