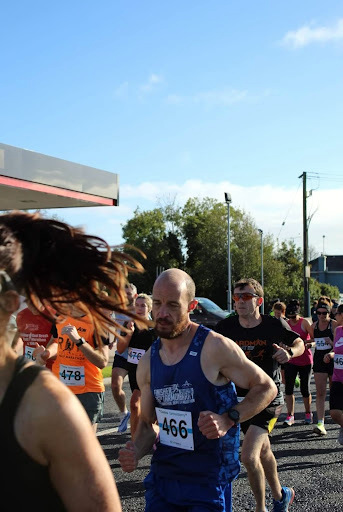 The hallowed turf of St Barry's.

Stablemate John Faughnan fought tooth and nail at the Tarmonbarry HM in County Roscommon to cinch up a 4’32” PB while battling his sworn enemies—wind and hills!

The Stable News‘ whizz-kid, Ally “the Chin” Smith, gave Faughnan a call for the inside scoop on all things Tarmonbarry:

Ally: Alright, John-Claude Faugn Damme! Sorry it’s taken this long to contact you. I’m switching broadband providers, and we all know how that goes! Never mind about me; what’s the story in Balamory?

John: Wouldn’t you like to know! It’s actually Tarmonbarry! Ah, it’s my local village in Roscommon. It’s an annual fundraiser for the local GAA club that I used to play with and of which I’m now the Alex Ferguson-in-waiting, as I coach my son’s U11 Gaelic football team!

Ally: Ha-ha, don’t be chucking any football boots at your star players, mind. Right, on to the race itself.

John: Bloody windy! I actually saw a couple of participants wearing windbreakers take to the sky like kites controlled by an excited five-year-old!

I hate wind and hills! Overall, I’m happy with the PB given the conditions. Given that I’ve run on the course route numerous times in the last two years, it’s unreal the difference running them in a race makes. I’d say I’ve never felt so tired in the last three miles of a race but glad I toughed it out. The fear of uploading a crap last three miles to Strava for all to see kept me going, ha!

Not pointing any fingers, but why, oh why don’t volunteers take the cap off the mini water bottles when they see you coming, or at least remove the plastic tab to help open it? Slippy hands meant I had to ditch my bottle with three miles left!

Ally: I’m sure you can raise that at the GAA AGM. Anything else interesting or just moaning about water bottles? HAHAHA.

John; Ha-ha. You might have enjoyed seeing me finish, as I had a nosebleed mid-race, so I had blood (William Wallace war paint-style!) smeared on my face for the last half and finish.

Ally: AMAZING, MAN! That’s a cracking way to finish off a gutsy run through torturous conditions. Anything else planned?

John: Nothing planned as of yet. Hope to find another HM somewhere in a couple of months to shave a bit more time off that PB in more favourable running conditions.

The Stable News put up The Stazza-Signal for a bit of craic from Stazzaman: “The Joker and Mr Freeze may have thrown their best/worst at me but John “Bruce Wayne” Faughnan rose from the Lazarus pit of despair to get a PB! Good man.”