OH, DANNY BOY, THE PRS, THE PRS ARE FALLING 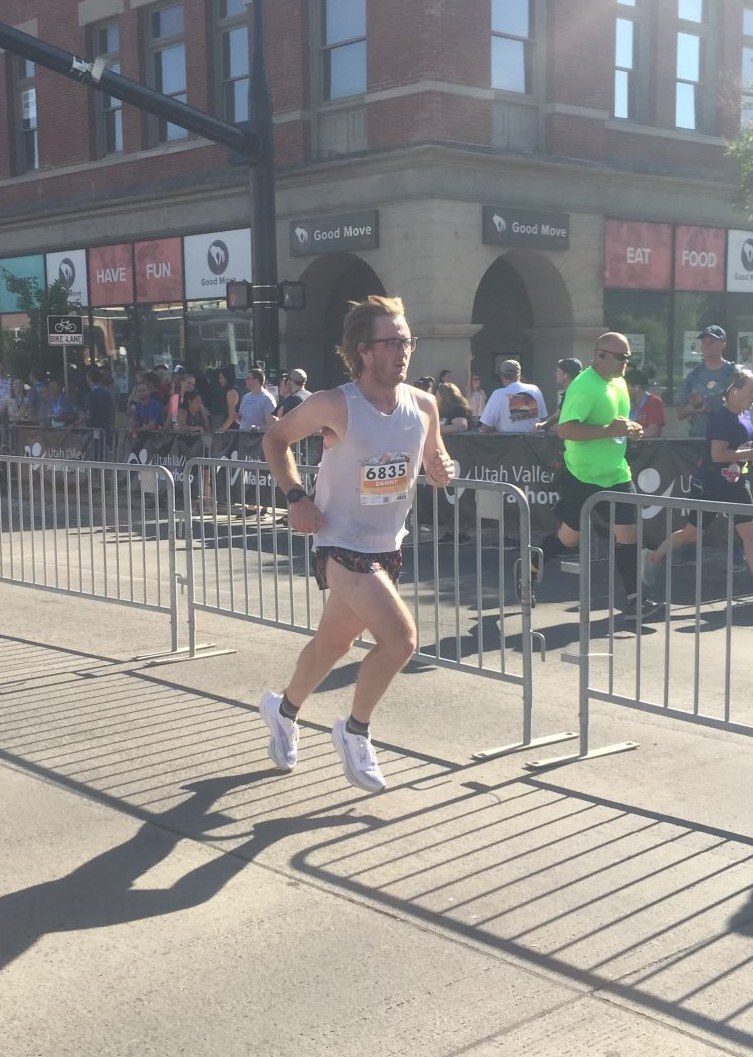 Danny “The Porta-Potty Hottie” Ellis ran the Utah Valley Marathon like he needed to go—BAAAD!

Normally seen chasing Chris “Krash” Pope on the trails and mountains of Provo, Utah, the up-and-coming trail runner decided to enter a road marathon—and didn’t he do well!

Danny ran a 2:47:54 and believes he placed 13th overall but can’t be sure as the race result receipt got all “messed up”; though he didn’t mention where. 🙂

Trail runner Ellis has a little trick up his sleeve—this might be the biggest personal best The Stable News has ever reported—but Danny is modest about his success: “Technically, it was a massive PR. I’d only ever run a trail marathon in, like, 3:40, so it’s almost an hour PR, haha.”

The Stable News sent the ever-present annoyance Ally Smith to Utah and told him to wait outside the bathroom of the 7-Eleven bathroom on the corner of N 400 E until Ellis either showed up or came out.

“The race started at some dude’s farm in Wallsburg and ended at the university in Provo. The weather was warm and sunny. It started off really nice, but it quickly warmed up to an uncomfortable 70/80°F by the end.

Honestly, this race went really well and I felt pretty great. The goal was to run between 2:45 and 2:50, so I managed to run almost exactly in the middle of the goal times. I’d planned on running the first half in 1:25 and then start dropping the pace to negative split the race. I came through the half in 1:24:44, so right on goal pace! Coming through the half, I felt extremely comfortable with the pace and kept leapfrogging this guy. Every time I’d pass him, he would blow by me a few seconds later.

We did this until about mile 15 when I decided to start dropping the pace, and I just bodied him in the 15th mile and gapped him. This move started a really high section for me. I began passing people every couple hundred yards and moving up the field. Around mile 20, I started running with this guy, and we worked together to keep the pace fast. We ran together until about mile 24, where I slowly pulled away from him. I felt strong during this race and did not start hitting a wall until about mile 22. The heat was definitely getting to me, and I had to dig a bit deeper to keep the pace going. My calves tightened up a lot the last half-mile, but I managed to push through to the finish. Honestly, that was a really fun race; I enjoyed my first road marathon. I feel like there is plenty of room for improvement!”

The Stable apprentice had this to say when he came back from Utah: “Danny’s such a cool guy; running sub-2:50 for your first road marathon is excellent. Just shows how much work he’s put in. Also, he’s a great follow on Strava. Every second run has a sprint to a toilet or bush, hahaha.”

The Stable News caught up with The Stablemaster: “Danny paced it perfect. A big negative split is always the way to do it; he had the willpower to hold off, and it paid back big time!”

So what’s next for Danny? “I don’t really have a firm date on my calendar at the moment. I was planning on running the Wasatch 100, but I decided to do something crazy and pull out of that. I’ll start focusing on road racing for the next little while.”

Looks like the road running bug has bitten him good and proper.