ON A WING AND ADARE 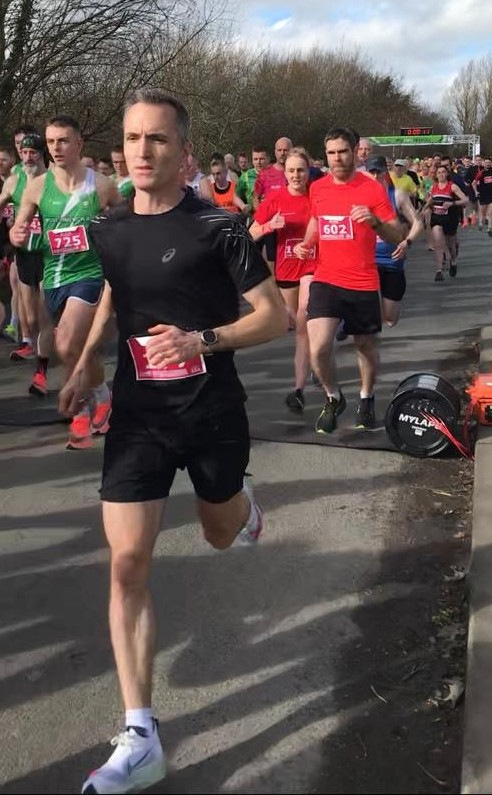 The Adare 10K was chock-a-block with Stablemates, and John “the Boss” Burton went out hard! En route to a 36:20 (a mere four seconds shy of his PB), the Boss blasted through the first 5K in 17:43, registering an unofficial, 15-second best effort. Bittersweet would be an understatement!

The Boss savoured the bright, windy day as he charged home in an impressive 23rd/730 overall and fourth M45.

The Stable News’ man on the ground, Ally “the Chin” Smith, put away his wind measurer and snatched the Boss for a debrief:

Ally: How’s it going, Bossman? You look a bit miffed but somehow happy at the same time—did all go to plan?

John: No, it didn’t, really. No PB for the 10K; I was four seconds short—argh! I could kick myself! I did get a 5K best effort as part of the run, though.

Ally: Ah, so close. Four seconds shy on a day like this means there’s a big dollop coming off the next one, Boss. Plus, a 5K “best” is tremendous; silver linings, and all that.

Ally: Good man. Tell me all the ins and outs, then.

John: It was an undulating course; the first four miles went very well, and I felt comfortable and in control.

Miles five and six started to suck the life out of me with uphill gradients and head-on wind in mile five and some of mile six.

I’ll take confidence away from the first four miles, and reckon on another day, I’ll push to knock more time off my PB.

Ally: That’s the Bossman I know! Chin up: going back to training in the knowledge that you have a massive PR coming is pure fire in the belly. When is the next one?

John: Nothing booked until the Dublin Marathon in October. Might have to find something else before then.

John: Cheers, Ally, I think I’ll do just that.

The Stable News rang Coach Stazza for some righteous ramblings: “A crackerjack of a run from JB … Narrowly missing a 10K PB, but whacking 15” off your Strava 5K record in the process, is why you are the Boss! Well done, John, well done.”