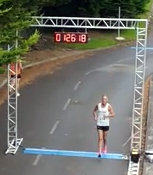 Stablemate Padraig “Swooner” Sheahan had the run of his 56-year-old life with a scintillating 1:26:27 at the Charleville International Half-Marathon—wooing a wonderful three minutes and eleven seconds from his previous best.

Conditions were wild, with swirling winds and hotter than average temperature for the end of September. Sheahan was not to be troubled by such trivialities; he waltzed around the course, twirling the breeze around his little finger to secure M55 victory.

The press tent was flooded with screaming fans who hadn’t had a glimpse of the godlike Adonis since his 5K appearances through the summer. Clambering through the banshees, Ally “the Chin” Smith grabbed Sheahan for a quick word before the onslaught:

Smith: Jeezo, Padraig; you have some following, eh? Nice to finally see you in person. How’d you find it?

Sheahan: Hi, Ally, hope all is good with you. Right, here we go. It was only my third time doing a half, and after messing about all summer doing 5Ks, I thought I’d enter this to see where I was at.

Smith: So you didn’t have this on the cards? When did you sign up?

Sheahan: About two or three weeks ago; I wasn’t having much success with the short stuff so thought why not? Target pace was 6:30/mile. First mile was downhill and downwind. I clocked 6:05 for that one before settling into 6:30-ish pace. After the first mile, I was on my own for the rest of the race. Ran well coming home after the turn—kept the same effort and passed out a lot of people. There was no point fighting the swirling wind. Ran a PB of 86:27 (previous best was 89:38), finished 51st overall, and first M55, so I’m happy with the effort/result.

Smith: Happy? I’d be ecstatic with that time and first-place result. Massive congratulations, pal. Now, you better get an ugly Coach Stazza mask on to avoid the masses!

Sheahan: Ha-ha, I’ll need to get one of those made. I got meself a Billy Murphy mask from The Young Offenders for moments like these!

Smith: HAHAHAHA, brilliant. No one will come near you with that on. Before you go; what have you got coming up?

Sheahan: I’ll be caked in mud for my beautiful skin, as it’s cross-country season for me.

The Stable News caught up with Coach Stazza, who was frantically typing—with steam coming out of his ears—on the Chin’s Strava: “He’s gone and done it this time … I was having a laugh … but now … Ooo …. He’s getting clobbered … and the rest of the Stablemates who think he’ll beat me … I’m happy Padraig has stayed out of it so far … He’s obviously much more mature (as well as more handsome) than me … Great race, ya old dog … You sliced through the wind like a hot knife through butter … Oh! That’s given me an idea … Good man, Padraig … Say I’ll win … pleease.”