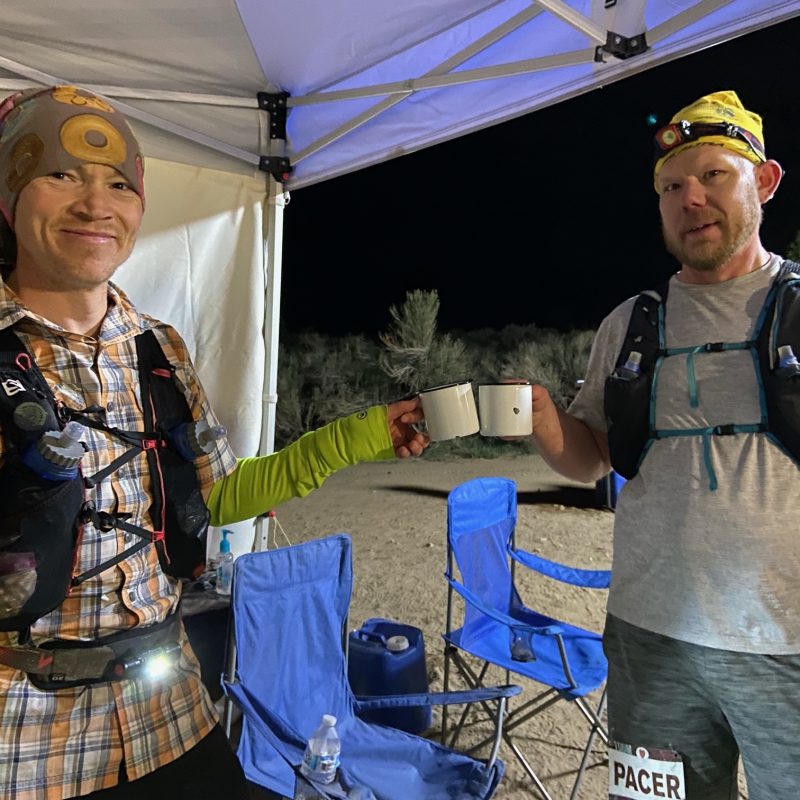 The ever-persistent Pope battled the highs and lows of the course (14,550 ft. elevation gain) in southern Utah (7,500 ft.–9,500 ft. altitude). With temperatures soaring to 80°F, the glaze on his donut shorts was running down to his ankles.

Fanboy Ally Smith was jumping for joy to talk with Krash. Sipping a can of Mountain Dew, Chris had this to say to the young upstart:

“Among mountain trail 100s, it was my second fastest. But this course was much harder than my fastest. Trail 100-milers are hard to compare unless it’s the same race and same course.

I went into this race with two goals: run sub-24 hours and test the effects of my new diet change on my endurance. The healthier eating gave me continuous energy.

I was more aggressive with my pacing and paid for it with some cramping. But backing off the pace and drinking pickle juice fixed it. I ran with a guy from France for many miles. The company kept the running fun and relaxed. I ran up hills I would normally walk in order to keep up with him.

At several aid stations, I would drink a whole can of Mountain Dew and would be wired for miles.”

Krash can see the benefits of a more balanced diet, only “krashing” three times in the full race; he added that “the second half of the race was much tougher—lots of loose rocks, sand, and gravel.”

Once Ally came to his senses from meeting the Krashmeister, he exclaimed, “Chris is sooo awesome! I can’t believe it; his run was fantastic, running well under 24 hours, jaw-dropping!”

The SNRR team got a hold of Stazza between calls to the IOC, Athletics Ireland, Kenya, and DABC Utah State Liquor Store #03 West Valley City:

“Chris ran an absolute blinder of a race, pushed when he wanted to and backed off intelligently. The diet changes helped him maintain a steady flow of energy, but I won’t bore you with the details. Congratulations, Chris.”

Keep an eye on Chris’s Strava, as he continues his training for “Summer 5K and the Bear 100 in September. Maybe a half-marathon. Maybe the Mountain Dew mile or Krispy Kreme 5K.”