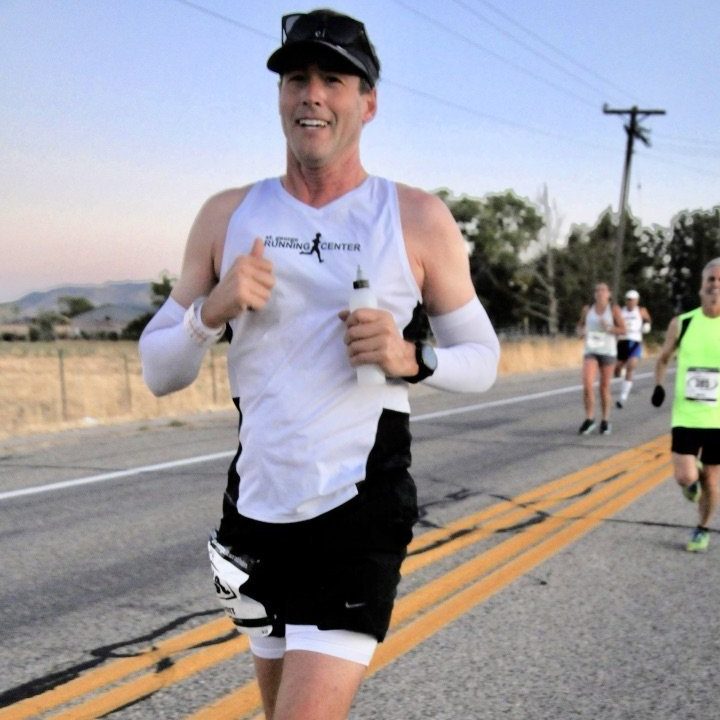 On Saturday, at the St George Marathon, Stablemate Scott Allen (53) showed age is no barrier to running marathon PRs,

The weather at the start was perfect…I huddled near a fire where I ran into Gary Botcherby and Josh Hernandez.  The race started on time at 6:45 which was wonderful seeing as we’d be able to run without any direct sunlight longer than we’d be able to in years past.

I started off conservatively, trying to stay on pace with the splits on my 3:14 wristband that I reused from my attempt last year.  I was 2-3 seconds per mile slower than target for the first two miles but picked it up in the 3rd mile and was under target times for the next 5 miles.

I figured that without any extra effort that it wouldn’t hurt to go with the flow until the Veyo climb.  Knowing that I had already banked some time I went up the hill conservatively and just before I crested the hill I stopped to pee.  I had a really successful break after arriving at the start and I felt like I’d emptied my bowels and bladder completely but I should have peed once again an hour later before the start.  Lesson learned as this mid-race stop cost me 20 seconds or so which prevented me from finishing with a 3:11 time.

I continued to run conservatively until I picked up my 3rd bottle at mile 13.5.  About a half mile before reaching that point I gave my 2nd bottle of Maurten, which had about 4 ounces left, to a guy that was struggling.

I ran down Snow Canyon as fast as I could comfortably while maintaining control and was able to come in under target splits for the rest of the race except for mile 22 when I was once second over.

I never felt hot enough to pour water over my body like I’ve done in years past.  The temperatures were comfortably cool the whole way.  I hadn’t really paid much attention to the splits in the 2nd half and it wasn’t until I began mile 23 that I realized that I would likely come in under my goal of 3:14.  This gave me great motivation to finish strong which I did in front of my family who was cheering me on in the final stretch.

Upon reflection I believe that the major reasons for my PR were:

1 A higher volume of running the 8 weeks prior

2 Coaching with proper slow training along with strategic workouts

6 Not racing too much

I’ve never felt so good the whole way of a race before and I really believe that with Coach Stazza’s coaching that I can significantly improve my finishing time at Mt. Charleston next April.