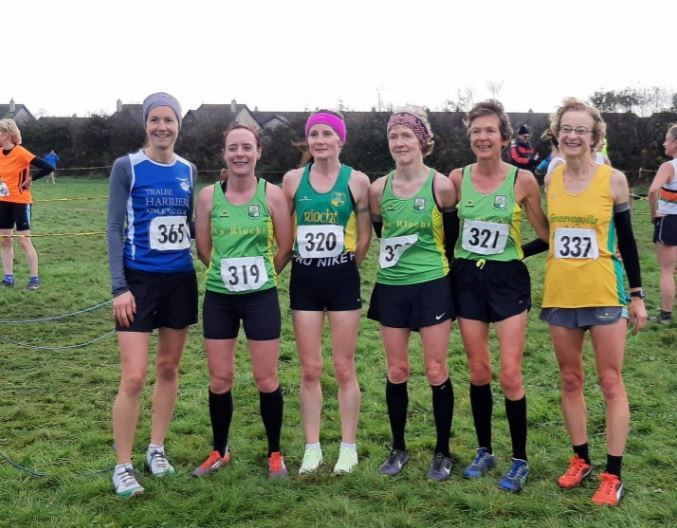 Neilan stormed to victory in the F45 category and earned third-spot overall in a muck churning 14’02”.

The Stable News’ XC contributor, Ally “the Chin” Smith, threw on his wellies and grabbed Neilan at the finish:

Suzanne: No worries, Ally; it’s only a 20km/h breeze—nothing major. First off, I need to thank Coach Stazza. This is a much tougher course than my last Munster Masters, and I was 1’38” faster!

Ally: Fantastic! So everything went to plan?

With all Coach Stazza’s training, I was flying. We were the first race after the relays, using a different route, and at the top of the field, we were directed down the wrong lane (a short loop that the relays were using), and I had to slow down and duck under tape while leading.

On the second loop, as the marking tape had been dropped from the first, incorrect loop, I wasn’t sure where I was going for part of the lap. At that stage, I was just gonna walk off the course. But I put my toys back in my pram and kept going. Lesson learned … Run the course before you race. I assumed it would be marked clearly and stewarded, but you know what they say about that word “assume.”

Ally: Ha-ha, I sure do! I’m surprised the markings didn’t blow away completely! Good on you for keeping your head and finishing strong. What’s next?

Ally: Brilliant! I’ll be back in touch then for a few words from the winner!

Suzanne: I’ll do my very best!

The Stable News put a call through to Coach Stazza, who was kitesurfing in Tralee Bay: “Perfect weather for crashing through the waves! And real XC racing conditions! Suzanne ran a blinder of a race, kept her cool when things went awry, and got the job done. She’s coming on brilliantly!”