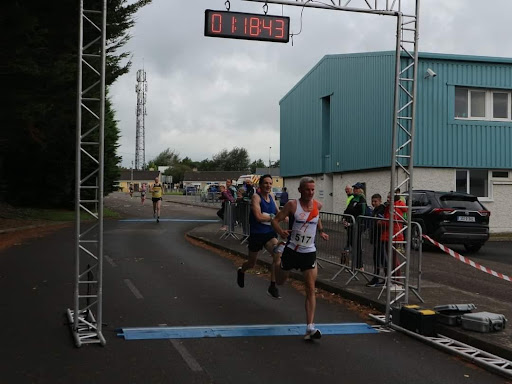 Stablemate Liam “Old Man” O’Connor knocked out a sensational 1:18:47—battering 5’45” off his PB—at the Charleville International Half-Marathon. The silver fox put in a sterling effort in 100mph winds and scorching heat to seize second M50 and 18th overall from a stacked field of top runners.

O’Connor’s number one devotee, Ally “Fanboy” Smith, was chomping at the bit to go and meet the legend once again, armed with a soft chamois to mop his brow and a tape recorder to capture his voice:

Ally: My, my, my: haven’t you had quite the summer of races, old boy?

Ally: Indeed you have. You must be the talk of Ireland! Let’s get the lowdown on this one.

Liam: Well, the weather wasn’t ideal for a start! Very windy, and after a few cooler days prior, the 16℃ felt worse than some of the heat we had through the summer.

Ally: Tell me about it, pal—freezing one minute, boiling the next. What did you say about that PB? The tape recorder got stuck there.

Ally: Flipping heck, Liam! You are on fire these days. I just can’t believe there was a faster old guy than you!

Liam: I know! A lot of top runners out today, but at least me pal Dave “Boy” Greene didn’t pass me, hahaha. Although, myself and the young lad Dave ran the race together, following the ideal pacing for the course handed out by Coach Stazza, which we adhered to all the way—and it worked out perfectly for us. Thanks, Coach.

The race was superbly organised and managed by North Cork AC, and the roads were closed to traffic, which was ideal. The conditions were very tough, as the winds were very strong from halfway running back into the headwind. Given the strong winds and tough finish, it made for a very challenging race. The first two km gave a nice, downhill start to ease into the race, while the next nine km was nice and flat. Then, the dreaded turn back for home to Charleville from 11km to the finish into the strong headwind. Km 15 and 16 were extremely tough, heading back to the main road, and then the last five km was just trying to hold the pace to the finish. Overall, I was delighted with my run and result. Not bad for the old lad, and a big PB in the bag.

Ally: Aww. 😍 See? The bromance is still alive. Super chuffed for you, Liam, and happy the plan worked out—even in the hurricane. You’ve got the Manchester Half-Marathon coming up next, yeah?

Ally: I’d suggest a rest. But have a chat with The Bossman and see what he thinks. Well done again.

The Stable News bumped into Coach Stazza, out and about sniffing for fresh Danish pastries at the local bakery: “Morning. Ahh … don’t you just love the scent of sweet pastries in the morning after a big race? Liam bossed that course and handled the wind like a pro. Always good to have a compatriot beside him, mind you. Remember what I said in the first report? They will push each other to greatness, and it’s coming to pass. Wish for a gentle breeze in Manchester, and the new PB will tumble further still.”