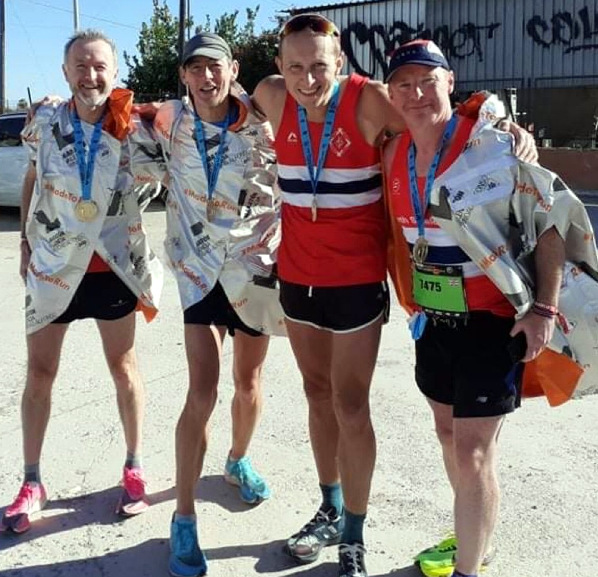 Stablemate and tea leaf aficionado Paul “Oolong” Robertson (49) brewed up a storm at the Valencia Marathon, slamming 5’4” off his Manchester result, which makes it 8’28” gained since joining The Stable in May of this year.

Robertson poured his heart and soul into the run, fighting gusts of 25kph, to finish in a spectacular 3:00:03!

None other than The Stable News’ very own tea boy, Ally “the Chin” Smith, sat down with Robertson for a catch-up over a cup o’ cha:

“How’s it going, Paul? This is the best cuppa I’ve ever had! Tell me all about Valencia, then.”

“After a slightly disappointing run in the Manchester Marathon in October, I travelled across to Spain with fellow Stablemate Paul Richardson (and a few other runners) for a pre-Christmas marathon, followed by a few days of tapas and too much beer and red wine.”

“Sounds like a great way to end the year.”

“Yes, but after a sleepless night in a dodgy Airbnb and a distinct lack of Portaloos at the start (which caught a few people out mid-run), I thought this had the makings of a poor performance.

After a short sprint from a nearby shopping centre toilet, we luckily gained access to the starting area 15 minutes before the gun.”

“Jeez! The worst place to be caught short! Valencia is notorious for not having enough loos.”

“I’ll know in future. The route was flat and fast with great support throughout, though it did get a bit windy in some exposed areas. I felt progressively stronger throughout the run and ended up running much faster than expected, and nearly broke three hours.

Paul Richardson, steady as ever, ran a 2:54—slightly slower than his London PB.

Overall, a great trip away, and definitely one to consider doing again at some point in the future.”

“Absolutely brilliant, Paul! A sub-3 is well in reach for you. Only four seconds to take off, but I think you should try for a 2:45. Anyway, I better get a move on. Catch you later.”

The Chin put a Zoom call in to Coach Stazza for his weekly debrief:

CS: That’s not an effigy; it’s a papier-mâché Christmas celebration centrepiece! Each year, we fashion a tribute to one of our favourite public personalities. A family tradition, if you will.

For 2021, Jelly and the kids insisted that it be Coach Jon Green. He’s the best in the world, isn’t he?

AS: Defo. It’s a decent likeness, too.

AS: What did you make of Paul Robertson’s run in Valencia?

CS: The lad’s making great progress. He’ll be a certified member of Stazza’s Sub-3 Army quicker than you can say “Stazza’s Sub-3 Army.” Mark my words. And another solid outing for “Richie” Richardson, to boot. The Stable is ending the year on a series of highs. Ho, ho, ho.

Paul will be jogging the Boston Marathon to see out his first half-century on this spinning rock before making The Stablemaster’s prediction a reality at next year’s London Marathon.