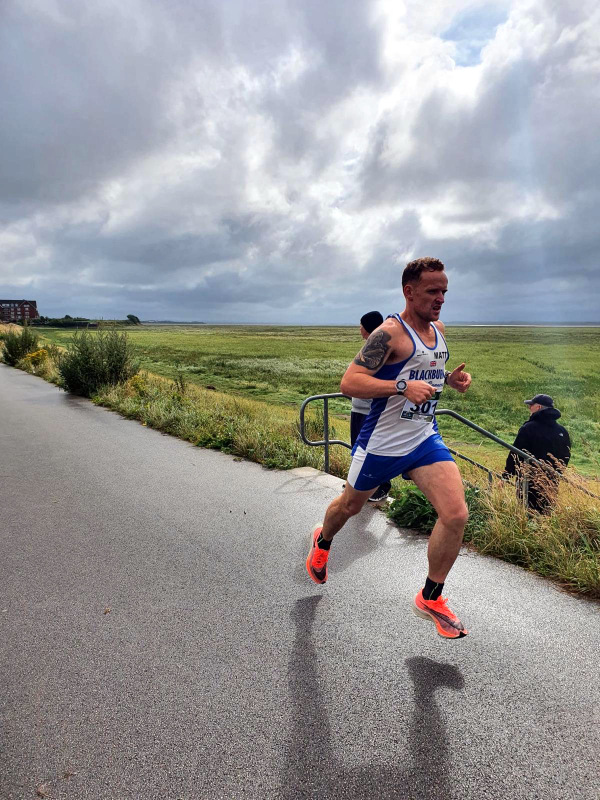 Stablemate Matthew “the Butcher” Maynard (35) carved his way through 23 mph winds at the appropriately named Windmill Half-Marathon in Lytham St Annes to secure a scintillating sixth-place finish in 1:24:44—just a few minutes shy of his personal best. The Blackburn runner tore up the tarmac on the coastal route, with stormy clouds challenging the lightning in his legs.

The Stable News (wearing chain mail) caught up with the Butcher post-race:

“I was hoping to have run about 1:19. I’m still confident I could have done it if there hadn’t been the wind to run against. I am using this in preparation for the Manchester Marathon, which will be my first one. I hope to be able to run the same pace as this race for the full marathon, and considering the wind, I think I have a good chance—but only if I think I’m in good enough shape for it with training going well from now until then.”

Assistant coach Ally “the Chin” Smith, pining for the return of The Stablemaster, gave us a quick comment while looking out of the window for his return: “Matthew’s a great guy: solid, consistent, and always wants to give his best in every session, and this race is no different. A legit sub-1:25 in tough conditions shows what he’s made of. Good luck in Manchester, mate.”

Keeping Ally waiting a little bit longer, Coach Stazza was just about to take his seat at the Royal Ballet in London to soak up a bit of culture before his final flight back home: “Shh … the ballet is about to start … my favourite, Swan Lake … it’s sublime … just like Matthew’s race. He pushed it with the wind at his back and conserved himself when it was in his face. Told ya, kids … it’s all about running to feeeeeel.”