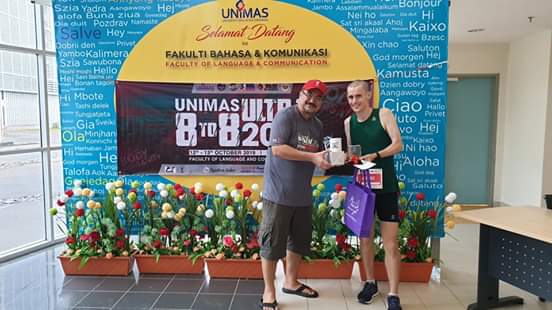 On the weekend, Mark The Champ Steacy delivered a courageous performance to win the Universiti Malaysia Sarawak (UNIMAS) 12hr race.

Sweaty Steacy’s gun-to-tape victory, in hot and humid conditions, was all the more remarkable given that throughout the final six hours he struggled with a range of problems.

Jubilant Steacy told The Stable News: “Managed to win with a course record. First half went more or less as planned (60 km) but had to overcome many issues in the second half which slowed me down.”

Shattered Steacy went on to say: “…with various parts of my body rebelling against me, it was a matter of holding it together as best I could. Had to adapt and concentrate on putting one foot in front of the other for most of it. Overall very happy to get into triple digits.”

The Godfather of old age running (anybody over the age of 40), Kraig Packer, said: “Really fine race! Top of the pack, cream of the crop. Proud to know you brother. Congratulations.”

Stablemate Lorri Randle said: “Way to go Mark!! For ‘holding it together’ while your body rebelled, that’s an awesome race!!”

The Stable News can confirm reports that following the race, a killer stomach bug hit Steacy hard. We’re delighted to inform our loyal readers that Steacy should make it.

The Stablemaster (Coach Stazza) told The Stable News: “Mark’s worked hard over the last year on his general conditioning. It paid off today. When it got tough, Mark got down to business. Unfortunately, after the race, a stomach bug hit the Steacy household. It was touch and go for a while there, but they’ve survived and will be ok.”