THE LIFE OF RILEY 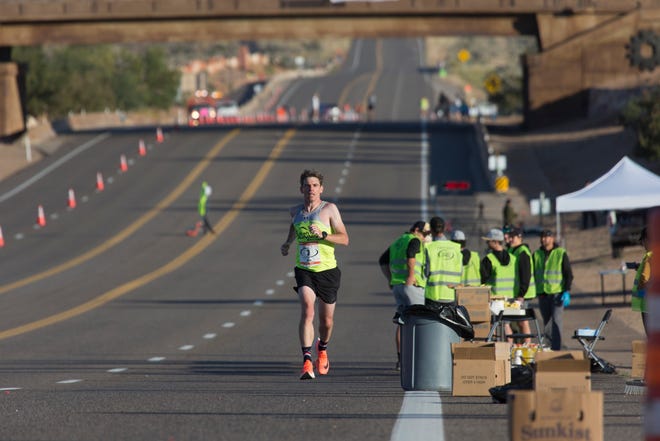 The big dog on the long, lonely road of a marathon runner.

Elite, hypercompetitive Stablemate Riley “the Captain” Cook overcame an abundance of adversities to finish second (in 2:18:22) at the St George Marathon, the pinnacle of Utah running races. Silver service didn’t sit well with the former champ, and even winning the M40 category—with a new course record—couldn’t put a smile on the face of the Type A personality with a 2:16 to his name.

The Stable News’ man on the ground, Ally “the Chin” Smith, saw Cook storming through the finish and dashed to catch up with him:

AS: Riley! Riley! Hello? Ally here from The Stable News!

RC: ARRGH! I CAN’T TALK RIGHT NOW! Come find me in a while, once I’ve calmed down.

A good while later!

AS: Alright, Riley? Is it OK to talk now? You looked a bit miffed earlier.

RC: Miffed? What does that even mean? Mad! That’s what I was, MAD!

AS: Well, you seem a lot more rational now. Tell me all about it: the good, the bad, and the ugly.

RC: It’s always tough when you’ve trained hard, and you’re prepared to run a faster result than you get. I was in shape to run a PB, and maybe even by a decent margin. Training runs were 10-15 seconds faster per mile for the same workouts in the build-up to my PB a few years ago. So my confidence was high.

The race started out OK, and I was through the first seven miles where I wanted to be. Around mile eight, I started burping, and by mile 10 I was throwing up. (I was with the leader when this started.) A small amount of stomach acid would burp up every three to four minutes, from mile 10 all the way to the finish at 26.2. It was mentally one of the hardest races I’ve done.

I wanted to quit and was just shell-shocked that the race was going so poorly. But I didn’t want to feel sorry for myself and fade in the race. I tried my best to fight through it, taking it one mile at a time. I kept thinking it would eventually stop if I just got through the rough part—but it never did. Any sip of water or fuel I tried to take in came right back up. So I stopped drinking, hydrating, and fuelling at mile 15. I was, shockingly, still on pace for a low-2:17 at 30km. But eventually, the lack of hydration got to me, and I was dehydrated the last 10km and just holding on the best I could. Overall, I’m upset with the result but happy with my fight.

AS: UNBELIEVABLE! I think I’d rather go 12 rounds with Coach “Mike Tyson” Stazza than go through that. At least I’d have a chance to punch back. Out there on the road, the fight is all internal … astounding effort. Even though you didn’t get the win, you got something better—more grit to push through, no matter what. Once you get the stomach issues sorted, you’ll be tough to beat! You’re some man, Riley.

Back on the Emerald Isle, The Stablemaster was putting the finishing touches to his Wendy house-cum-sauna when we called him for his opinion on Cook’s outcome: “A gutsy run from Riley. I’d say he was in 2:14 shape from his training leading up to the race. It’s unfortunate his stomach refused to cooperate, but we can hopefully get that sorted soon, and he’ll be a force to be reckoned with.”