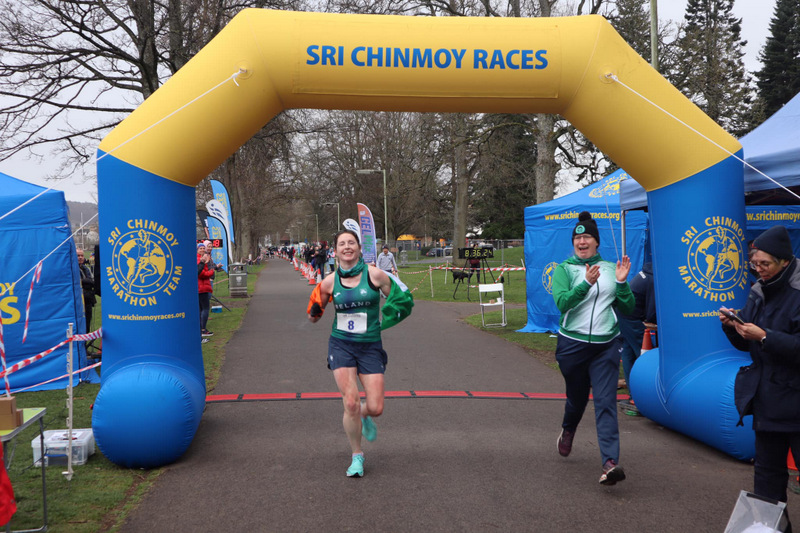 Stablemate and international ultrarunner Tricia “Mighty” McLoughlin took on the Anglo Celtic Plate 100K in scenic Scotland. Her goal? Glory for Ireland! And that she earned with an epic time of eight hours and 36 minutes, slapping 38′ from her debut 100K time and finishing in eighth place.

With General Puffball in Cancún for spring break (he watched the 22 Jump Street movie and thought it looked like a great time), and “the Chin” about to embark on a four-day glamping adventure in Glen Nevis, it was down to McLoughlin herself to set the record straight on her loopy ultra:

“This year, the race was in the pretty North Inch park in Perth, Scotland. It was a 2.4km loop. It was pretty chilly at the start (about -2℃), so it took about 10km to feel my fingers and toes—crazy championship rules mean you cannot cover your number on the singlet!

I ran with a couple of the Irish ladies for the first 10km, so that kept me very controlled on pace. My first of many, many bathroom stops broke up the group. After that, I ran the rest of the race solo, bar a couple loops with one of the Irish lads who was ahead of me, but who was struggling at about the 90km mark. I was not very sympathetic so told him to, Suck it up, tuck in with me, and run ‘easy,’ as he had all the hard work done by then. He rallied and finished strong, eventually dropping me for his last couple laps. I love the ups and downs of ultrarunning races.

I ran at a steady pace throughout and felt pretty good. I was apprehensive for the race, as the body was pretty whacked going into it. I kept waiting for the wheels to come off. 😉 I got through a marathon in ~3:35 and 50K in ~4:13. I ran about 72km for six hours and then started to think, Just over a half-marathon to go! It was still too early to be confident, but it was looking good to not be a sufferfest. 🙂

I kept trucking and was pretty happy with how the body was coping; fatigue was kicking in from about 80km. At this stage, my stomach was a bit dodgy—now was the feeling of wanting to puke, so I delayed on one bottle. I was done with the Maurten drink, but I endured it knowing that the alternative was to crash and burn. I used just the Maurten 160 drink for the whole race, nothing else. I took one every three laps, mostly, for a total of 12 bottles (330ml), with 40g of carb each, so a total of 480g, which equates to ~56g per hour—which is about right in theory, I think.

I came around the running tent with ~93km on my watch. Now, starting to count down the laps is acceptable when five or fewer; with 42 laps, one loses count very quickly. I asked the lovely lady timing me if it was three laps to go, to which she said “five.” I was a lil’ deflated on that lap, as that seemed excessive, but with GPS you can never be sure. Although running ~105km seemed a lot to be off! Well, it turned out when I came around the next time, it was my penultimate lap. Then, I could finally relax; there was ‘only a parkrun’ left, so I kept motoring and picked it up a little for the last lap.

All in all, it was an amazing day; it could not have gone any better, really. I was delighted to feel strong and knock 38 minutes off my time from last year, which was my first 100K race. Now, when can I do it all again? 😀

Shoes—I wore the Nike Tempo NEXT%, and that was a good choice. My legs are good after; just the tops of my feet are tender, especially the right one, and the right big toe is stiff. Everything else is grand, and I could have managed a shuffle the next day, I think.

Fuel—The Maurten seemed to work well, but I had five-six bathroom stops, which is very unusual! You can see that in my splits.”

Unfortunately, as captain of the good ship Stable, Coach Stazza had to make sure the Stable News office was well looked after, so he was on night duty for two weeks: “Oof, I tell you, those two have more holidays than Santa Claus. But I’m not complaining … much … I get to be here when the exclusives come in! Like this beaut’ of a race report Tricia did. It’s got the highs and lows, the struggle, the hero’s journey … It’s a masterpiece. Those two better take note when they come back!

A marvellous performance, Tricia. Congratulations on a super run and the massive, 38’ PB.”