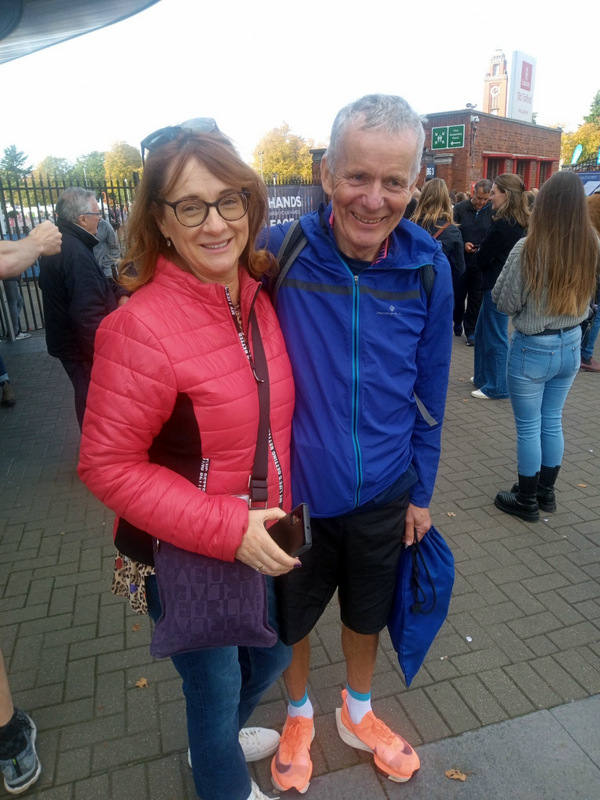 Stablemate Dave “the Whippet” Travis broke the Irish M65 marathon record by a nail-biting two seconds at the Manchester Marathon—a strong stone’s throw away from where the old boy grew up in Liverpooool. His blistering 3:02:00 sheared some six minutes from his previous PB.

Not content with breaking national records, Travis won the M65 category and placed third M60, all the while wishing his esteemed Everton could do the same on the football field.

The Stable News’ Mancunian contributor, Ally “Our Kid” Smith, was on hand with a brew and a butty for old dog Travis:

Ally: Yer all right there, our Dave? You didn’t ‘alf peg it round that course! What’d ya make of it?

Dave: Very well organised and great crowd support. Not as flat as I thought. I was on target for a sub-3 until I got cramp towards the end. I’ve never had cramp before, so it was a total shock, and I had to shorten my stride. So despite the PB, I was disappointed with my finishing time.

Ally: Sound, Dave, sound. Give yer ‘ead a wobble, would you! You can’t be disappointed with a time like that, and you are now the holder of an Irish record! Excellent run: you’ll get below three hours soon enough, mate. When’s yer next outing, then?

Dave: Regular parkruns and a couple of local 10Ks. I’ve entered Manchester again in April. I qualified for Boston, but it would work out too expensive. I would like to do one of Dublin, London, or Berlin in the autumn. I also have a place that I won a couple of years ago in the Connemarathon Ultra, but not sure if I’ll be able to do that a month after Manchester. My local (Kinvara) marathon/half-marathon is on March 5, so I could possibly use it as a training run for Manchester?

Ally: Minted, mate. Sub-3 in April it is, then. You’ll need to speak to The Bossman about Kinvara. Definitely, the half could be used as a training run, but it’ll be up to you and The Gaffer. Right, I’m gaggin’ for a pint! You coming, mate?

The Stable News received an emergency voice note from Coach Stazza, who was heading out on his daily stroll (for pies and pastries): “Within the group, we have a number of people over 50 and 60 who are running sub-three hours … But for David, who has been running for three years, to break the Irish national record for 65+ is amazing. We think there’s a lot more to come … He’s capable of running around 2:45 in the next year or so!”