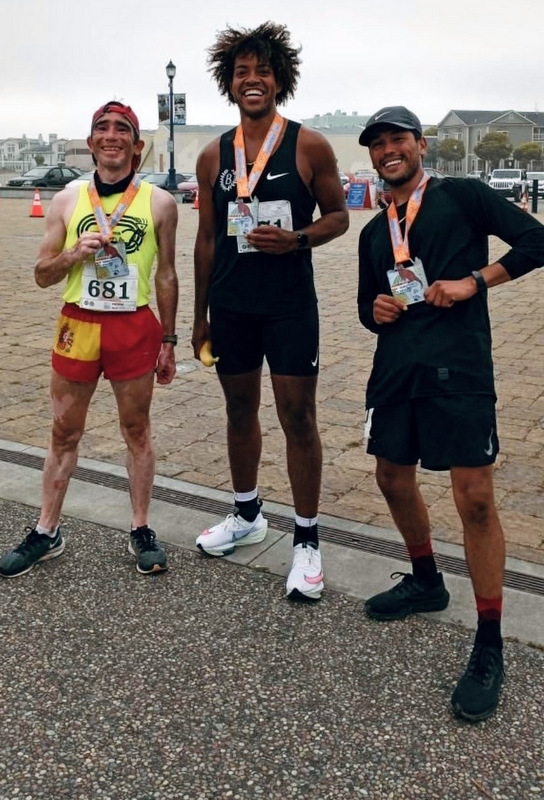 Towering over the competition.

Stablemate Bjorn Trowery spanked 67 seconds off his half-marathon PB with a 1:24:30, which earned him third-place overall, and first in his age group, at the Humboldt Bay Half-Marathon in California, USA. The volleyball legend had to drive five hours from NorCal to humid Humboldt to pick up the spoils.

The Stable News was on hand for the exclusive. Speaking of the conditions, Trowery said:

“Terrible, if I’m being honest! 100% humidity, soupy dew point, and warmer than I would have liked for a race that was a fitness check. I took what I could get and decided to go into it with a goal in mind, as well as a chance to bust some rust and feel the theatre of a race for the first time since 2019.”

But it wasn’t all doom and gloom for the man with a smile as wide as the Golden Gate Bridge:

“It was a PB by 1’07’’, and more than anything, a ton of confidence given the conditions weren’t great. It’s tough to endeavour into something you know won’t be fun, but I learned a lot about how it feels to be done mentally, but not done physically. The course was a tiny bit short, but I’m really happy overall that the training is working. I’m feeling stronger as the miles progress, and that my 1:25:37 half-marathon time trial from March wasn’t a fluke.”

The Stablemaster’s assistant coach, Ally “KO” Smith—attempting to hang a punchbag in the newsroom—added: “Boy, oh, boy! Bjorn sure took the rust-busting to a new level with that run. I’d have done the same to get my hands on a medal that size. Plus, it has my favourite animal, an otter, on it!”

Trowery’s target is a sub-3 hours at that most famous of world marathons: London.