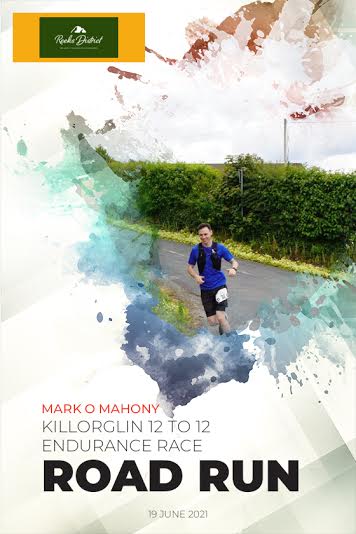 Stablemate and ultra-nutter Mark O’Mahony ran the rest of the field into the ground to take the win at the Killorglin 12 to 12 Endurance Run in County Kerry. Slow and steady, Mark stalked his victims, picking them off one by one, to achieve 75 miles in 11 hours and 40 minutes. With partial laps not counted, Mark secured top spot with time to spare and sat with a brew until the clock struck midnight.

O’Mahony minded the humid and cloudy temps and still bagged a marathon PB, according to his watch. It’s the first time he’s run under 3:40 for that distance, though he didn’t specify which marathon, as he ran almost three in 12 hours.

Always keen to meet crazy ultra types, Ally begged to speak to Mark—and listen to what he had to say: “I was just patient and knew not to chase first place. I knew that, eventually, I would wear Ed down; I usually finish strong, and thankfully this event was no different.”

In typical ultra-running lunacy, Mark relishes the longer stuff. He told us that his next race will be the “Belfast 24-hour on October 16th. My main focus for the year is the 24-hour event; I’m stronger on the longer distances. I love being at races which are long enough that we all end up looking like zombies! ☺”

Ultra fanboy Ally noted: “I fancied doing an ultra … once. Then I bonked and had to drink out of a puddle to get home. But after reading Mark’s Strava bio about parking your ego and that there’s nothing special about running 100 miles, I … still think I’ll leave it up to guys like him. Fantastic going, Mark O.”

Coach Stazza, fresh from the track and sipping from a Thermos filled with … we’re not quite sure what (but he did have a glow about him ☺) added: “Mark’s build-up to this race was sublime, tapered to perfection; I could tell he was ready to go all in, and he did so with patience and perseverance.”