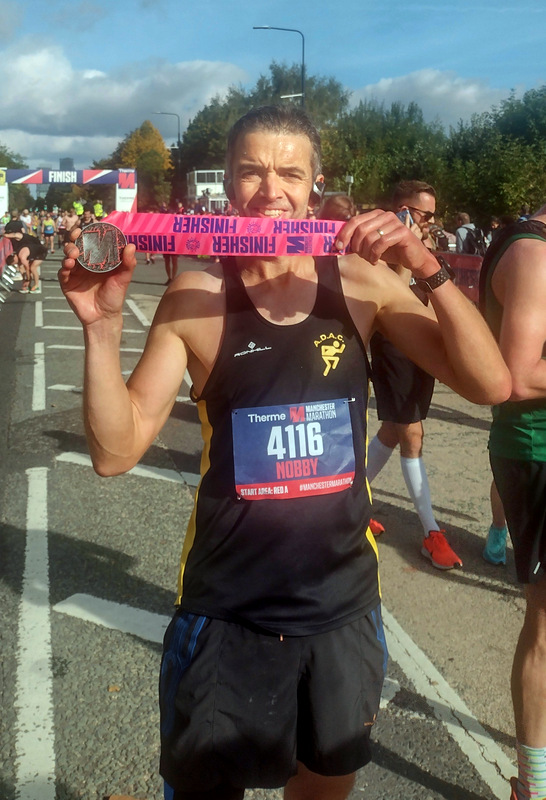 Stablemate Norman “Nobby” Johnstone malkied the Manchester Marathon in an impressive 3:23:29, skelping 10’01” off his best—but he was a bit scunnered not to get his goal of 3:10.

The wee Scottish farmer thought the climate was “absolutely beelin’.” Ploughing around the capital of the North as fast as his wee legs could carry him, he finished 94th from 932 auld folk (M50) and 1682nd overall.

So what Norman is saying is that he is rather disappointed for not following Coach Stazza’s advice and starting too quickly. He reached halfway at 1:33, when he should have been around 1:36, paying the price for this at 20 miles and hitting the wall. In closing, he feels he needs to work on the mental side and the discipline not to rush off before he tackles another marathon next autumn.

Ally: Cheers, pal. Whit else ye got comin’ up?

The Stable News called up Coach Stazza, who was firing into the haggis supper Nobby sent him as a thank you: “Oh, my goodness! I can feel my arteries constrict with every mouthful, but it is a delicacy, so I must endure. 😅 Well done on a solid run, Norman. I did warn you …The marathon isn’t a wee cowrin beastie you can bully … It’s a Loch Ness monster of a run that you need to fight smart. Enjoy your short stuff before we get ready to slay the beast in the autumn!”